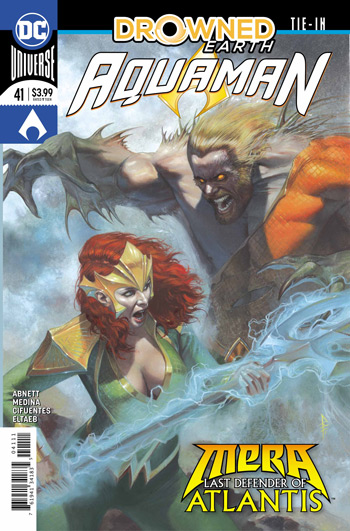 I can’t express how excited I was when I heard that Lan Medina would be drawing this issue. Lan is an amazing artist that we don’t see that much on mainstream books lately. And now that he’s drawing Aquaman, I have to ask why nobody has thought of putting him on here sooner. He’s got a great visual style that really fits the character nicely.

This issue is one of the first parts of the Drowned Earth storyline. It all starts here. The title is of it called “Here Comes the Flood.” It’s a rather appropriate title too! Aquaman has gone missing!

He is of course being held captive by Black Manta. But nobody knows this so the world is going to hell in a hand basket!

And it’s leading to a big crossover fall event!

The issue starts off with Mera trying to get things under control. There are these weird fish people coming out of the water and she has to fend them off! Abnett begins the book on an exciting note and it doesn’t let up! Medina draws that opening scene beautifully too. It’s harrowing and even a bit ominous.

From there, something terrible happens to Murk! Mera has to reach out to the Justice League for help. We see Batman trying to answer some questions for her. And that is when things really just start to escalate.

By the end of the issue, Mera loses control of Atlantis. It leads to a cliffhanger which needs to be read to be believed. And it’s all handled wonderfully. With Batman in the book, it’s only a matter of time before the Justice League gets involved. And I can’t wait.

At the end, we get to see Black Manta too. What role will he play? Where has he put Arthur? What’s going to happen next? How big will this crossover get and what are the lasting ramifications going to be?
Abnett hits all the right notes in this issue. The story is one that is focused and tight. There is no time wasted here at all.

The art compliments the story well. I think this storyline is going to be bigger than anyone thinks it’s going to be. And that’s damn exciting indeed.