Although I am delighted to be an October baby, that one defining thing about the month, namely Hallowe’en, has never been a thing for me. I’m not a monster guy, nor a horror guy-and have never been.

I’m the comics man who’s never seen a good 90% of all the horror and monster movies that everybody else in the business on both sides of the table has been consuming since such things were consumed.

Not to say that I can do much more than a reasonably creditable job on superhero comic books, either. Beyond the artwork, wherein I certainly do the best I can, the note I get from editors all too frequently when I find myself writing superhero material is, consistently, “Use their powers, more, damn it!!”

I really do forget to do this, all the time. It says something about how I feel about the super stuff…and you, of course can draw your own conclusions. It should be pointed out that I grew up wanting nothing more than to be the guy who drew cape, mask and cowl stories…and then I grew up.

I can’t imagine anyone who’s paying attention is the least bit surprised to learn that I just don’t take any huge pleasure in doing straight up, mainstream, appeal to the middle ground superhero comics, with or without penises.

Yes Virginia—change and growth can happen, even in mainstream comics. 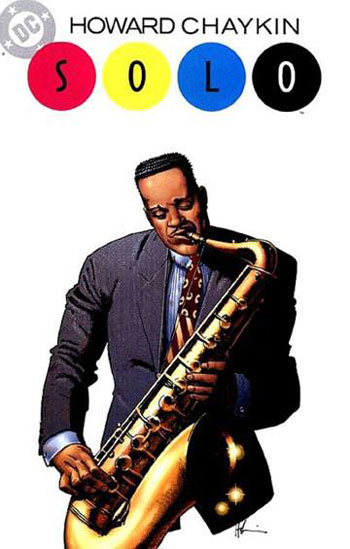 All this is to say that I’m a genre guy all around. I love crime, historical fiction, westerns, erotica, political satire, noir and satirical humor among others—much of which I read for pleasure, and much of which enthusiasm I serviced in my volume for DC’S SOLO series.

The inspiration for my SOLO material was EC COMICS. I discovered those long-lost books in the BALLANTINE reprints of the early 1960s, and of course was first seduced by the science fiction titles. Try as I did, I never warmed to the horror stuff, as noted above—I am, for a fact, too damned squeamish.

That blood—it belongs inside, right?

This led me to the actual comic books, which were a revelation. I was collecting these books, barely fourteen years after the EC line of comics had been driven from the stands by the hysterical and all too successful campaign to blame juvenile delinquency on comics, instead of sticking it to the parents. From a perspective of standards, of content, of work product, that fourteen years could have been a lifetime.

The work was just better than anything I’d ever seen, period.
Now, as I matured, my interest in the SF titles waned dramatically.

Certainly, they remain beautifully crafted comics, but I lost any interest in science fiction as a reader decades ago, and these admittedly gorgeously pretty comic books no longer have a hold on my imagination.

But Kurtzman’s war books, and Craig’s work on CRIME SUSPENSTORIES (or as they really should be called, Miserable Marriage where Murder not Divorce is the Only Option Comics) and Wood’s contributions to SHOCK SUSPENSTORIES (or, as they’re known in my house, Liberal Hysteria Comics) continue to interest, inform and frankly delight me.

Yes, the stories, with the profound exception of the majority of Kurtzman’s war story output, are too often equipped with crackerjack surprise endings, and a tad too much self-satisfied and frequently leaden irony to suit an adult, or the more cynical modern reader, for that matter.

But the artwork, and the brilliantly deliberate approach to narrative—on Kurtzman’s part, almost detached, the rest near deliriously frenzied—on the vast majority of this work is so brilliantly executed, so rich in its story value, as to often transcend the obviousness of the stories told.

And furthermore, let’s not forget, these were comic books aimed at children and adolescents, at a time when any adult seen reading comics was either regarded as a mental defective, a pervert, or a GI with nothing else to do with himself between bouts of getting his ass shot off in the Korean “police action.”

Significantly, many if not most of my contemporaries, when we came into the comic book business, were EC fans, and under the EC influence. Very few of us were interested in the superhero comics that were then and remain the mainstay of the comic book business. Very few of us were equipped to do that sort of thing on a professional basis…and I in particularly was spectacularly unskilled in the mainstream. 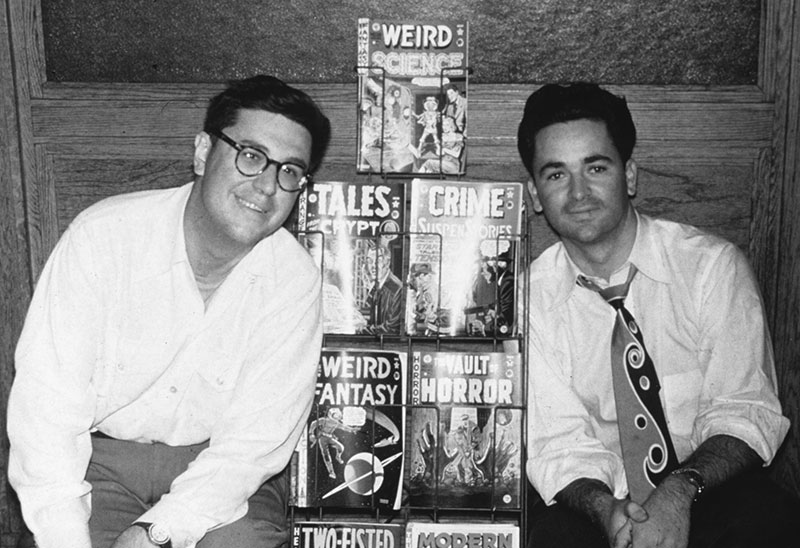 And lest you think I’m being falsely modest, bury that nonsense right here, right now. I started out not very skilled, and I caught up, and then some. I know just how good I am at what I do, thank you very much.

But as ever, I digress.

Certainly, the horror and SF books were what were beloved by the majority of the talent of my generation back then. To be quite honest, it took me a few years into my professional career to learn to appreciate the other genres produced by those great men. Once I did, however, it stuck like crazy, and those hardbound volumes have sat alongside my tabouret for what is now forty years and counting.

I can’t speak for others of my generation, but I always assumed—or maybe simply hoped—that we would represent the flowering of a second generation of that early 1950s sensibility, a new iteration of EC and its ethos…telling stories that echoed genre fiction for what I identified as a new mainstream.

Needless to say, this was long before I came to understand and deeply regret that the comics code had not only irreparably infantilized mainstream comic books, but had also infantilized the audience, too…

…Not to mention, nor to underestimate the importance of, the arrival of talent in the mid to late seventies who had the skills, abilities and most importantly the enthusiasms to bend superhero comic books to their own wills, as opposed to being bent over the table by them.

(Not to bury the lede, but this arc…the importance of EC, and its creative reach over two decades, connecting spiritual fathers and prodigal sons…informs the primary narrative and central theme of the second arc of my fictional history of our little industry, HEY KIDS! COMICS! So as frequently noted elsewhere, buy the fuck out of the first arc, there’s plenty more where that came from.)

Again, I can’t speak for my contemporaries, but I never anticipated a generation of new talent with sustained enthusiasm for superhero narratives. The lifespan of this enthusiasm continues to astonish me.

And, entre nous, it also dismays me just a tad—since it leaves me, my interests and my enthusiasms out here on the marginal frontier. 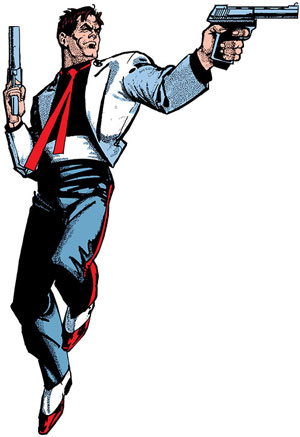 So, my career, nearly from word one, has been invested in exploring the genres of mainstream narrative that appeal to me as a reader. I produced a lot of science fiction and sword & sorcery when I was younger, until my interest in such material waned and finally died.

For the record, yes, I know that AMERICAN FLAGG! and TIME(SQUARED) qualify as science fiction.

Whoever said I was consistent isn’t paying attention…and despite the superficially science fictional nature of both projects, FLAGG! is far more importantly a political satire delivered in graphic design, while TIME(SQUARED) is a love letter to fashion, crime fiction and crime film, Bebop, my child’s eye view of mid-century Manhattan, and, most importantly, to industrial design.

For quite some time, I was identified with 1930s pulp style material, despite my complete uninterest in the source material itself.

Rather, my enthusiasm for this sort of material was rooted in my love of the clothing, design, social attitudes and characterization of the period, translated into comics.

BLACK KISS, in all its filth decadence, degeneracy and black comedy, was my attempt to deal with my then genuine paranoia of living in southern California, depicted in a black and white style that, for me at least, was a paean to Southern California noir.

For the record, I haven’t lived in Southern California for over three decades in such a state of paranoia. I got over it.

For the past few decades, I’ve been producing material that derives its inspiration from what I read for entertainment. And, since I don’t read books about magic, or monsters, or the supernatural of any kind, I’m guilty of not serving the rapidly shrinking mass of mainstream fandom that buys comics that still loves all those things—to my mind, frequently unconditionally.

This is, of course, exacerbated by the imaginary but all too painfully real checklist that most modern comic book enthusiasts use to judge unfamiliar and occasionally challenging material—a set of prerequisites that tends to obviate anything that falls outside this all too limited set of standards.

In that regard, for the next few days, as I find the time—or rather, as we all know, when I feel like a break from work of any kind—I’ll post some examples of this broad collection of genres that I’ve produced, that some of you, considering the vast swathe of material that surrounds it, might have missed, getting lost in the shuffle as things not of the conventional and typical variety too often do, at least for my taste.

I’ll also offer an occasional list of the material—books, movies, television, whatever—that made and continues to make me want to make the kind of comics I make.

Most or all of this material is available on Comixology, and it would do my (recently acknowledged) aging heart good if some of you would at least briefly put down the latest iteration of HEROES WITH LASERS COMING OUT OF THEIR EYES OR THEIR FINGERTIPS OR WHATEVER COMICS, or maybe this week’s ANTI-HERO WITH A WOUND SO DEEP IT’S ALMOST COMICAL IF ANYONE WAS ACTUALLY PAYING ATTENTION COMICS, or even the current issue of MERELY SATISFIED WITH A CULTURAL ALLUSION AT THE EXPENSE OF ANYTHING ACTUALLY CONSEQUENTIAL COMICS, and give them a try.

First up is MIDNIGHT OF THE SOUL, my tribute to/pastiche of the crime novels of writers like David Goodis, Jim Thompson and Dorothy Hughes, and of course to the films of Anthony Mann and his brilliant cinematographer, John Alton. 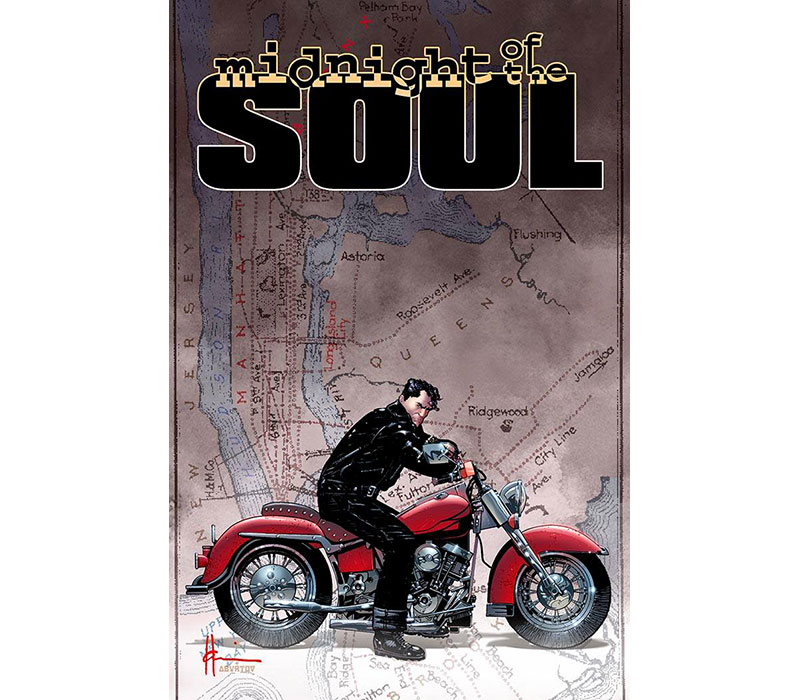 It’s a project that is near and dear to my heart, a narrative that’s been in my playbook for nearly two decades. It’s a story of love and of love lost, of redemption, of screened memory, of recalled horror of an all too human making, and of finding the will to move on from that horror…

…Told against the romantic backdrop of a now utterly lost and forgotten Manhattan in all its glory, from Greenwich Village, to Times Square to 52nd Street and Harlem, in that golden moment that was 1950—a year that, although we never noticed it, marked the end of America’s golden moment.

More to come, sooner rather than later, and, as ever, I remain,