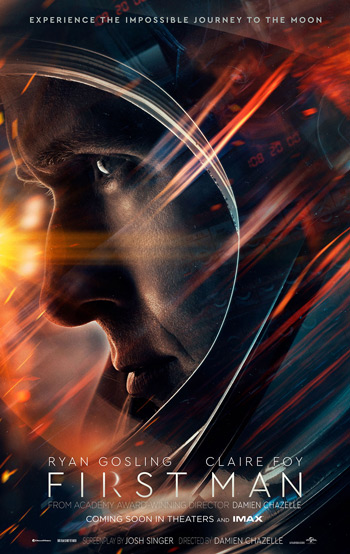 First Man is a wonderful film about how the NASA Space Program impacted the life and family of the first man on the Moon, Neil Armstrong, and less about the actual Apollo mission itself and this is why I enjoyed it even more then I thought I would.

As an avid fan of films about NASA and the space program; The Right Stuff is one of my favorite films as is the TV series From the Earth to the Moon, First Man is right in my wheelhouse and I was pleased to see a more personal side of one of the most important events in modern man’s history.

First Man, perfectly cast two time Oscar nominee, Ryan Gosling as Armstrong. For all his swooning good looks, Gosling’s biggest strength as an actor is his ability to wonderfully act with his eyes and with his mannerisms. He brilliantly conveys the quite, intelligence and reserved stoicism that Armstrong possessed. I wouldn’t be surprised if this leads him to his third Best Actor nomination this year.

Damien Chazelle, Oscar-winning director for La La Land, really sublimely nails the era of the 60’s and the stress of the Cold War. He captures the tension of trying to beat the Russians into space and ultimately, the Moon exceptionally well. That tension is enhanced by really focusing on the dynamic in Armstrong’s personal life and family as well as the other families of the NASA astronauts and how the program has impacted them.

Every triumph and heartache is really felt through the wonderful script, tremendous acting, beautiful cinematography, and intense and palpitating sound design. It truly puts you in the cockpit of the fighters and the pods of the training vehicles the astronauts used. On the opposite side of the same coin, the claustrophobia in the household of Armstrong’s family, as he is about to leave on his mission possibly never to return, is as intense in its quietus as the claustrophobia felt by the astronauts while they await launch in their tiny capsule.

A true triumph of film making that equally treats the training of the men of the Gemini and Apollo missions to the moon as well as their families and loved ones as important as the other.

This is definitely an early contender for Best Picture and possibly best actor and actress for Claire Foy’s brilliant depiction of Janet Armstrong.

This is a worthy addition to the previous brilliant films about our space program and one that I would be happy to own when it comes out on home video.

But don’t wait until then.  This film should be seen in theaters as the scope of the air and space footage created is breathtaking ,as is the phenomenal sound design. You feel, see, and hear every creak, rattle, engine roar, and breath of the astronauts as they venture forth to the Moon.

I always say, the sign of a successful film about real events that we know the outcome of is whether or not I am still riveted, worried, scared, and cheer even though I already know who the whole thing turns out. This film let me experience an event that I was not alive to witness myself. It transported me to the 1960’s and I sat in wonder as the first man stepped foot on the surface of the Moon on July 20, 1969 and that in of itself is a triumph.