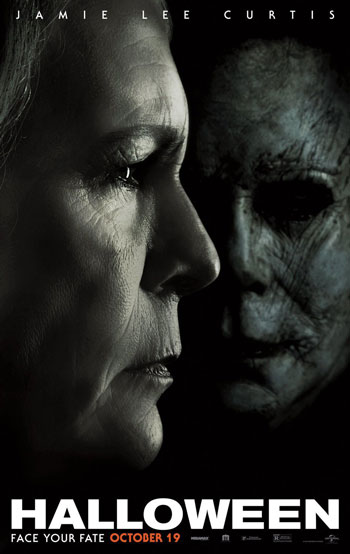 John Carpenter gave us the original Halloween in 1978, and it has been mostly downhill since then.

Michael Myers has moved from suspenseful to gory to incredulous over the years. While the mask has stayed the same, each director and writing team has added their own influence to the series. The franchise as a whole has been relaunched multiple times, but this version stands out in that it is a direct sequel to the original, ignoring all other iterations.

Some may think this is just convenient, but director David Gordon Green has created a new film that blends seamlessly into the original after a multi-decade story gap. More than a nod to the original, Halloween lets us feel the nostalgia with only modest updates in comedy and weaponry.

The movie begins with Myers coming to the end of his time in a local institution before being transferred to a much harder jail on — wait for it — the day before Halloween. While a traumatized adult Laurie Strode (Jamie Lee Curtis, reprising her original role) is now an agoraphobic militant, she says she has been “praying for his escape. So that she can kill him.”

Consider her blessed, as the transport bus flips for an unnamed reason, releasing Myers to go on a killing spree on Halloween night in Haddonfield. As he slashes his way to town (retrieving his mask along the way from some hapless true crime podcasters that kick off the film), he stays true to the slashing and straight brute violence that is integral to a Michael Myers murder.

No one seems to take Laurie’s valid fears seriously, especially not her estranged daughter, Karen (a fabulous Judy Greer). She was also traumatized, but by her mother’s endless survival prep. As she tries to convince her mother there is no such thing as the bogeyman, he is reminding babysitters and morally lax teens that they should have every reason to fear this night. While we wait for the inevitable showdown with Strode, the in between characters are actually entertaining.

It’s a feat to make an audience feel something for a side character’s death who may have only received 10 minutes of screen time. But every speaking role is purposeful, and every conversation elicits reaction. Some characters, such as a smart-talking babysitting charge, are bound to be audience favorites for their brief, but hilarious, additions. Others are tragic, and while the audience cheered at our screening for several slashes, there were also a few “awwwws”, as the cast did a great job of making you root for them.

While this sequel is fun and suspenseful, it is not necessarily groundbreaking in any way. No shots stand out for their composure, no special effects are especially notable. But I suppose making a film 40 years later that speaks to audiences that have never seen any of the movies while catering to diehard franchise fans is a feat in itself.

There are winks throughout to film buffs who remember what movie in the 1978 version was on the television before the babysitter went upstairs, or how bodies we thought were down just “disappear” on that second “let’s just make sure” glance backwards.

And of course, even horror novices know the straight bend from the waist every time Michael seemed to be down for the count.

Originally a lower budget indie film made with a director without a ton of history, the Halloween franchise is one of the most celebrated of the genre. This sequel is far more realistic, entertaining, and in line with the one that started it all than the majority of films following the 1978 release. Get ready for a new, but nostalgic, chill up your spine. And for god’s sake, check on the babysitter.