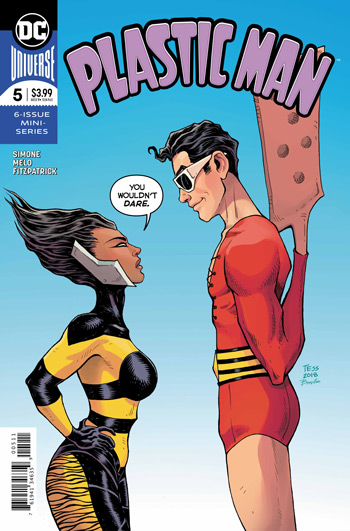 The penultimate chapter of Simone and Melo’s reimagining of Plastic Man’s origin sees our hero in a state of deep regret, for both his criminal past and his new super-powered state.

He’s also under the impression that Obscura lied to him about the Cabal (which she didn’t), so he feels like a giant fool.

While a visit to Dr. Kirk Langstrom ends in a tussle with Man-Bat, the actual Cabal plots to discredit Plas, since he knew of their existence.

Worse, Plas ends up screwing up his chance at a family all because of his lack of self-esteem.

It’s the dark night of the soul, and Plas is no different from other protagonists experiencing this cavernous low before finally triumphing.

Gail Simone’s Plastic Man isn’t entirely different from her Deadpool, and the jokes and dialogue are uneven here.

Adriana Melo continues to merge the look of an animated series with the grit of a film noir, to mostly interesting results.

The product is a decent enough superhero comic with few surprises, though it does set up a final confrontation with a more terrifying villain than any of the Cabal.

Looking forward to seeing where all of this leads.