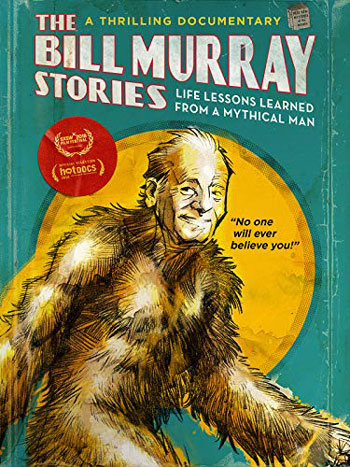 Bill Murray has become the modern hipster Bigfoot, unexpectedly tending bar at South-by-Southwest one minute then reciting poetry to construction workers or washing dishes at some random college party the next.

Yet while Sasquatch sightings are notoriously difficult to document, director Tommy Avallone has compiled a feature’s worth of interviews and charming Murray clips (both from his onscreen filmography and offscreen encounters with random civilians) to answer not terribly mystifying questions about the actor’s motives for mingling with the hoi polloi and why people love it so much when he does.

And if the foregoing description sounds one-note and weightless as meringue, well, it just doesn’t matter (in the words of Meatballs‘ head counselor “Trip” Harrison) when the overall cinematic experience is so relentlessly enjoyable.

Framed as a first-person documentary (like a cotton candy Roger & Me), Avallone attempts to add a narrative framework to his random collection of Murray anecdotes by stepping in front of the camera and announcing his intention to engineer his own magic moment with the film’s subject (not unlike Caddyshack‘s Carl Spackler hunting down gophers…with equally futile results).

Early on, for instance, the director calls the legendary 800 number his quarry uses instead of an agent to book acting gigs (yet sadly doesn’t reveal how he uncovered the intriguing set of digits).

Unsurprisingly, Murray doesn’t respond to Avallone’s request for an interview, thus setting up (inadvertently or by design) a thematic through line which ultimately grounds the film: namely the truism that desperately seeking serendipity is the surest way to prevent it. It’s a FOMO-era lesson the director ultimately embraces and dramatizes via an effective coda near the end of the project’s brief 71 minute running time.

Still, it’s a safe bet that most viewers who check out Bill Murray will be more interested in the stories than the life lessons it promises, and fortunately Avallone favors the former over the latter, teasing viewers with recollections and reenactments of “mythical man” exploits (featuring a humorously creepy masked doppelganger of his subject) before delivering the goods with a treasure trove of selfies and giddy cell phone footage documenting the actual celebrity in his natural habitat: the ever chaotic eye of the Murricane.

And sure, maybe there’s a bit of Groundhog Day style repetition as Avallone’s documentary mostly repeats the same basic sequence again and again — people encounter Murray unexpectedly then burst into big goony smiles — but there’s enough variation and sheer joy in the vignettes here that you’ll likely find yourself grinning right along with them.

So keep on crashing parties, Bill. Lord knows we all need the laughs nowadays and bustin’ makes us feel good.