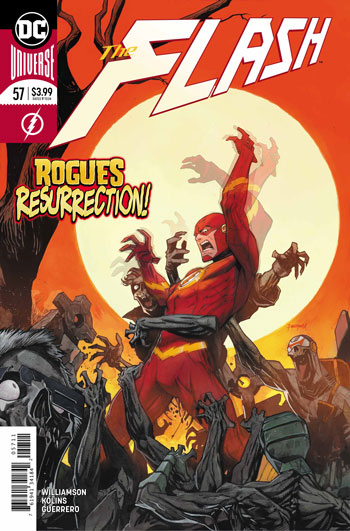 The issue begins with the Flash in the middle of a hellish nightmare that doesn’t let up.

Nobody does “hellish nightmare” quite like Kolins and in this issue he really does excel.

The Flash and Detective Burns start off the issue in the middle of a maze. They then talk to Heatwave.

They are trying to make sense of their surroundings and can’t seem to.

Just what the hell is actually going on here?

Apparently, the Flash and Detective Burns are in Barry Allen’s apartment attached to a Matrix-like device. That device is their link to the fantastical place that they are in. While in there, a big battle erupts and there is a lot of talk about different power forces. It actually turns into a big muddle to read.

Part of that is because it’s becoming a bit overly complicated. I don’t mind challenging the reader’s mind. It’s when you start challenging their patience that it all becomes a bit much.

It all ends up resolving itself.

Then, there is a nice moment between Barry and Iris that I just loved. It redeemed the entire issue and I felt it was back on track. Add that to a surprising ending and a revelation on another Earth about the “True Flash” and I was back on board!

The story is all over the place but there’s more good than bad so I’m in for the long haul. I am glad this particular storyline had ended.

Hopefully what is coming up has more consistency.