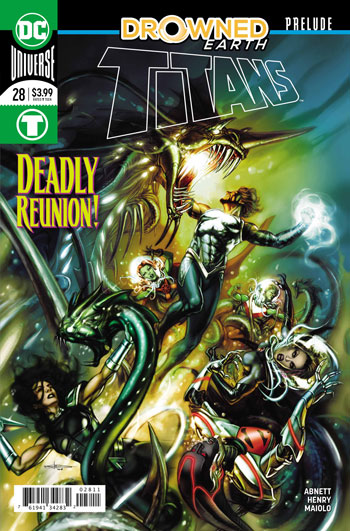 All right – now that’s what I’m talking about.

Add an invading army of interstellar warships, and one cockamamie strike force assault against said armada by a single rag-tag team of never-say-die heroes, and writer Dan Abnett is all the way back in his element.

The Earth is drowning, her populations transformed into horrific rampaging fish-monsters, and there’s an alien invasion underway to boot.

And founding team Titan powerhouse, Tempest, is not having it.

As an Atlantean, and Aquaman’s one-time protégé, that’s not surprising. The earth’s oceans have become an unnatural disaster, Aquaman himself has gone missing, (which you already know from reading Justice League #10, right?), the rest of the earth’s heroes are caught up playing defense, trying to ‘evacuate’ as much of humanity as possible, and, so far as Garth can tell, no one’s taking the fight to the enemy.

Meanwhile the Titans have a Boom Room. And an itch to relieve some tension.

Tempest is exactly the shot in the arm this team, and this book, needs right now. In Abnett’s hands, Garth has always been passionate and headstrong, but under the circumstances, Tempest lives up to his name, sweeping into the lives of our bruised and battered team as a force of nature we’ve never quite seen before, and sweeping them into a glorious mania of heroism and reckless derring-do.

And it works! Oh, thank God, does it work.

If there’s ever a team that’s needed to cut loose it’s this one. Whatever reservations Donna Troy’s been struggling with since Nightwing’s tragedy melt away before Tempest’s unrestrained crusade for victory, Gar gives great bestial voice the interstellar swashbuckler in all of us, and the team pulls together just like you want them to, pulling off the completely outrageous Hail Mary the earth just might need to win the day.

Even if there’s an additional wrinkle in space-time left to contend with. And one really long drop…

Losing Nightwing at just the same time that DC has decided to launch their new Titans television series of all things, is both difficult and very annoying right now. But if Abnett can continue to infuse this book with the sort of unvarnished heroism and energy found in this month’s issue, it may just be that he’ll help the team uncover a silver lining in Dick’s absence. Couldn’t hurt to have them find themselves on their own for a bit… even if they end up getting really, really lost to do it.

Helps to have the assist of Clayton Henry and Marcelo Maiolo this issue. Henry’s character depictions are excellent: expressive, dynamic, and everyone is looking rather grown-up, which is a very good look for the team. And Maiolo manages to get every shade of green just right.

And that’s a good thing. Given some of what’s coming down the galactic pike for our Titans, it couldn’t hurt to have them stick around for a little while longer.

Next Issue: Big, Mean, and Super-Green!