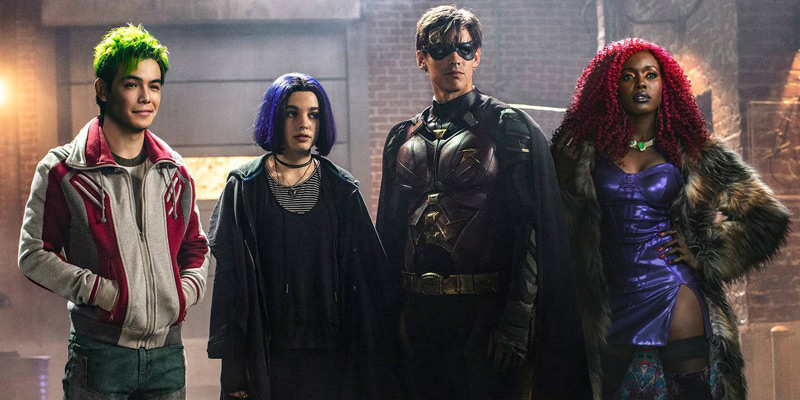 Let’s get this out of the way right up front; if you’re looking for great, you’re not going to find it.

Ok, with that out of the way, let’s assume there will be spoilers a-plenty, even if I’m going to err on the side of not spilling any beans. Once again, I will **TRY** not to ruin this for anyone.

The musical, Hamilton, has a lyric that goes, “You are uniquely situated by virtue of your position” (From the song, We Know) and that’s kind of why I’m teaming up with FoG to give the “Monday Morning Quarterback” rundown of TITANS, the new DC Universe Original series (or, if you’re in Europe, the new Netflix series).

On paper, this should be a slam dunk, and to be fair, it could well be eventually. You have Geoff Johns, possibly the most reliable storyteller at DC Comics for the past 15 years or more. You also have Greg Berlanti, who has reshaped and redefined what DC has done on TV in the past (Birds of Prey) and even present (Gotham). And finally, Academy Award winner, Akiva Goldsman, who wrote Batman and Robin. The movie. Directed by Joel Schumacher. I don’t want anyone to think that this, alone, disqualifies him to be involved in this (or any other DC) project, but…that stink resonates like the gaseous fumes in Centralia, PA; it ain’t fading away any time soon. Thing is, you can’t point to any of the individual parts and say, “This is wrong because of X.”

That is, until Geoff took credit for the “Fuck Batman” line.

Oh! I neglected to say what makes me uniquely qualified to write this weekly recap. See, I’m a comic book writer (who isn’t these days?) who…I hesitate to say that I “specialize” in the “sidekick grows up” genre (if such a thing exists), but I did have a semi successful comic called STRAY that was successfully funded on Kickstarter (twice) and published by Action Lab Entertainment (with three trade paperbacks for you to purchase at your local comic shop or on Amazon!).

I have a reputation with my friends and colleagues of being a big Dick Grayson/Robin/Nightwing fan, and trust me, I’ve earned it. I grew up thinking my dad was Batman, which is normal when your dad and mom aren’t together, but I trained to be Robin. That part might not be normal.

So, in my mind (and in the mind of our esteemed editor), I was possibly one of only a handful of people that could write this and, well, I approached him first.

I want to start off with the show page on the DC Universe app:

Immediately…IM-ME-DI-ATE-LY…They have ruined what makes the Teen Titans such a great franchise, and it’s in the first sentence:

Allow me to be clear; being a Nightwing fan and possible Nightwing historian/expert, does not, in fact, make me a gatekeeper to the character or his franchises (Outsiders, Titans, etc.).

Last I saw, Bill Finger and Jerry Robinson created the character, and DC Comics/Warner Brothers owns it. I own NO stake in the character (although, I wonder if I bought WB stock…). I get no say, whatsoever. This falls into the idea of what is required and what is expected. I’m required to pay $7.99 a month for the service. I’m expected to lose the service if I don’t pay. I’m not expected to watch ANYTHING, which would be a waste of money, for sure, and I’m definitely not required or expected to specifically watch TITANS. I *chose* to pay for the service, and I chose this show to watch, and that’s fine, but in no way am I trying to say that I can do better or that anyone should be fired, or whatever. The folks involved have put a show out there for whoever wants to watch it. I’m taking them up on that offer.

Are we clear on this?

A few months ago, right after the first trailer came out, I was on Twitter and saw a few of my colleagues talking about how it didn’t feel right.

What, they asked, did I think? What I said then is still true, and that is this; it would be extremely short-sighted of me to think that this iteration of the team doesn’t appeal to *someone* out there. There are folks who can’t stand Teen Titans Go! but I love it. I did question this gritty approach because it seems to fly in the face of everything I know about marketing; go for the largest audience you can. Go after the viewers that hold the works of Wolfman and Perez as sacred text. In my head, the folks that are shelling out the dough for the app are mostly (mainly?) comic book fans, so why wouldn’t you appeal to them?

There are 10 episodes of the first season left and it is entirely possible that we will see this team get there. In Episode One, you have Dick Grayson/Robin in Detroit, Rachel/Raven in a suburb of Michigan called Travers (she makes her way to Detroit later); Kory/Starfire is in Prague and Gar/Beast Boy is in Ohio.

In other words, Titans NOT Together.

On to the show…

The fight scenes are dark when Robin is doing the fighting, which is the…I don’t want to say, “expectation” but it’s hard to roll your eyes too hard because this has been the way since 1989. He’s brutal; at one point, he does the old Ric Flair gimmick and rubs his opponent against a brick wall (instead of a steel cage). He’s clearly got a chip on his shoulder, but he explains to his new partner, Amy (Rohrbach, a nice nod to the Dixon/Land era of Nightwing) that he left Gotham to stop himself from becoming like Batman. Which, you know, I get it; he wants to step out of the shadow of the Dark Knight, but at the same time, there’s just something–if you were trying to distance yourself from Batman, maybe don’t punch a guy in the chest six times the same way he would? I do like, however, the way the bad guys underestimate the “little birdy” and actually turn their attention away from Robin to see if Batman is there. That’s actually a nice touch. 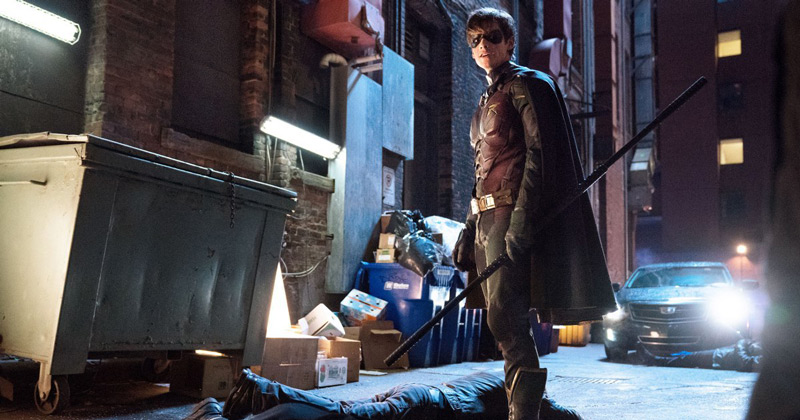 Brenton Thwaites does a better job as Detective Dick Grayson. He moves confidently, he has a rep, not unlike Bud White in LA Confidential; White hated woman beaters and Grayson hates child abusers (which, if you conflate this with his attitude toward Batman, you might have a reason for the grittiness, but you gotta spell it out some). He keeps his Robin outfit in a suitcase, and he looks at it as if it’s a last resort, a burden. Again, gritty. After the aforementioned fight scene, he takes great pains to clean the uniform. Without the benefit of knowing director cues, it’s a very interesting acting choice. I just wish I knew for certain what is driving his anger, other than inner angst.

We can imagine it’s the weight of the Dark Knight, and some of it is spelled out when he meets Rachel, but it’s so foreign to the character of Dick Grayson, that it’s so impossible to tell if we’re looking at Dick or Jason (who will show up eventually). Again, comic fans would be correct to assume this character is unfamiliar in some ways.

All of which leads him to Rachel (Teagan Croft), who along with Anna Diop as Starfire, have the most interesting introductory arcs in this first episode (Beast Boy shows up at the very end, almost like an after credits stinger, but…you know, before). Rachel is dealing with a monster inside of her, the demon we all know she is by birthright. On the screen, it’s presented well. It goads her, it influences her every move, speaking in her ear. It’s kind of like the scarab with Blue Beetle (Jaime) which makes me wonder if he appears on this show at some point, how do you reconcile the two characters with inner voices? There is a man (I believe called the Acolyte in IMDB) and it’s hard to know if he serves Trigon or Brother Blood. Whoever it is, it’s clear that Rachel/Raven’s story is the story of Titans: Season One. 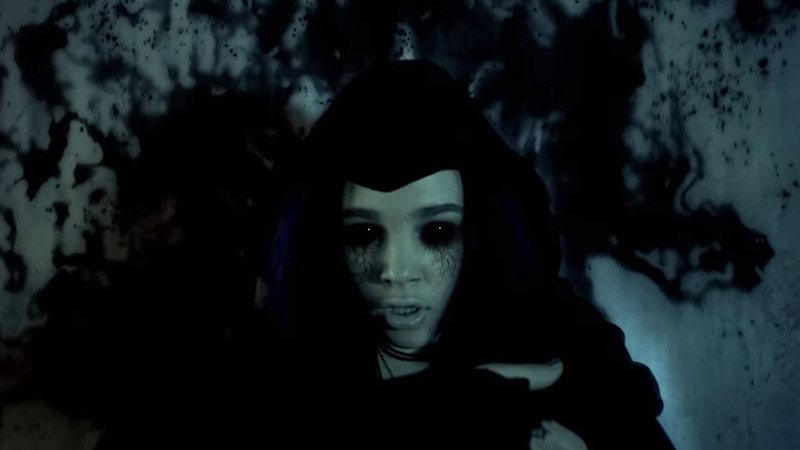 Kory is probably the B-Plot, the one that may lead us into Season Two.

She realizes she is…different is the only way to put it, but doesn’t know how or why. I know; we all hate the outfit, but if you woke up in Prague, struck with amnesia, but treated like royalty (she has the entire top floor of the hotel rented just like a…hey, a Princess!), it leads you to more questions than answers. She’s a superpowered Jason Bourne. It’s an interesting situation to put her in because it puts us in those same shoes. She is unfamiliar, and she’s aware of that. We’re going to have to take this trip with her. When she first releases her powers, it’s a surprise to her. I think a lot of the flack Diop gets is based on the fact that her skin is black, and not orange. Without going into too much of a political thing, it’s clearly become a thing of race (look at her treatment on Instagram and Twitter) which is unfair; there’s a lot of mystery with her here and, in a show about superheroes, what’s wrong with mystery? Why not give her a chance? 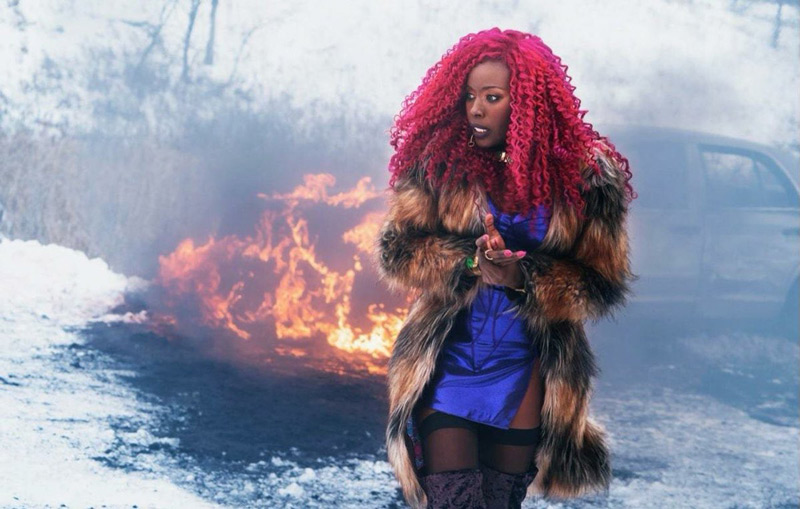 What might be the most interesting thing about the entire first episode is that we know more about Dick Grayson (we even get his obligatory origin out of the way, which is odd…this might be only the second time his origin is done on film, but this one is more in line with his true origin), but he’s less a catalyst of the action as he is an active bystander, watching his fellow detectives react to Robin being in the city, watching things happen to Rachel (going as far as attempting a rescue, but not being needed). Robin is, in a lot of ways, the guy we’re most familiar with, so he’s almost the least interesting.

I don’t want to put a letter grade on this episode because that might be unfair to someone who wants to check it out, will read this and then change their minds. So, I will end every week with answering a very basic question:

Yes. There’s enough here to pique my interest and see what comes next.