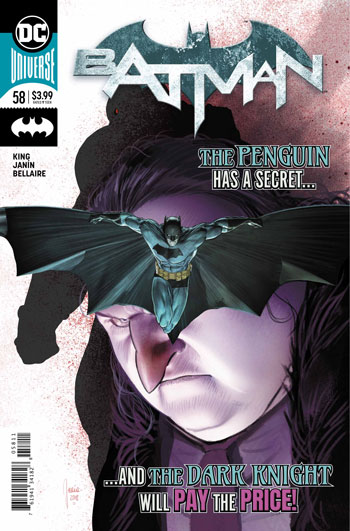 We haven’t had a good story with the Penguin in quite awhile. And it’s awesome to see Tom King’s take on this dastardly foe.

I opened up the issue and I was so damn excited. Tom King writes an amazing version of the character and this is a very cool issue of Batman.

This issue is all from that Penguin’s point of view. Tom King switches things up a bit and it’s wonderful. The opening sequence has the Penguin being woken up and informed that a woman he knows had been found dead.

The Penguin simply responds “Bring me a top hat. A tuxedo. And an umbrella.”

This is a different side of the Penguin that we see here and it’s unexpected.

From that opening sequence, we cut to Batman beating the hell out of the Penguin. We then go to the Penguin being locked up at Arkham Asylum.

We see that it was a ploy to meet up with Bane.

What the heck is this all about? I don’t know but I’m intrigued!

From there, the Penguin is released! There is a homecoming. We find out the woman’s relationship to the Penguin. And then we find out how it relates to the Mr. Freeze court case from a few issues back.

King apparently has a bigger story in mind than we thought (he always does) and everything relates. That’s the key to what makes his writing good. Everything is important and nothing is a random throwaway.

The end of the issue has a threat to Alfred that is resolved in an incredible way. Then, Batman and the Penguin meet up. And it leaves us with one hell of an ending where you don’t know what is going to happen next!

King is just killing it on this title. It just keeps getting better. He deserves all of the accolades he is getting. The art by Janin is tops too. This could be a definitive Penguin story arc for the character. Let’s see what happens!