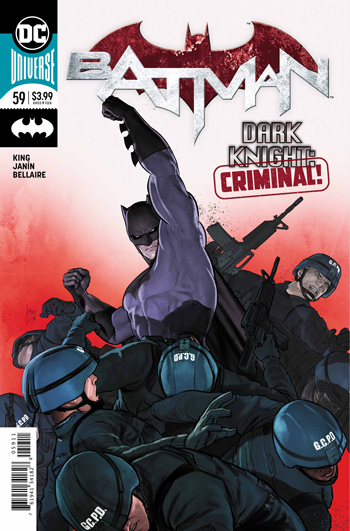 This is the second part of Batman facing off with the Penguin and it’s so damn good! The only thing that isn’t is that great is the wait between issues. This particular issue had me on the edge of my seat throughout and didn’t let up!

There are two stories going on here. We pick up from last issue where Batman is talking to the Penguin. He is trying to figure out what the Penguin wants this time out. And then, Oswald Cobblepot drops a big bomb on Batman.

He tells him that Bane is manipulating him from inside of Arkham Asylum. And that Bane has been doing this for quite awhile.

So then we see Batman going after Bane. The Penguin tells Batman that he will never understand just what Bane is. Batman breaks into his room at Arkham. Bane acts docile.

Is the Penguin just messing with Batman’s head? Or is Bane a bigger threat than anyone realized?

My guess is that his character is the connecting thread for King’s overall 100 issue storyline.

Then, Commissioner Gordon comes in. Batman tells him that Bane has been using Arkham to launch attacks on him. They get into a fight. It becomes brutal. Then Gordon kicks Batman out.

Is Bane this diabolical? I’m saying yes. The last image just about confirms that. Janin does a marvelous job making the art awesome. He can do emotion and the big action scenes and make both fantastic. He’s one of my favorites for sure.

This issue is a major chapter in terms of King’s overall story. It’s excellent. I can’t wait to see where he takes us next. It’s sure to be incredible.