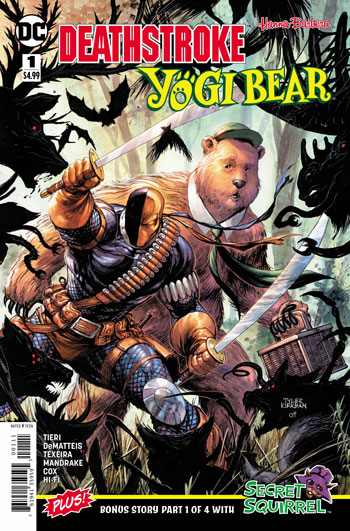 Just when you thought the DC/Hanna-Barbera crossovers were over, here comes another one! And it’s the team up nobody demanded!

Still, that doesn’t mean that there isn’t some fun to be had. Frank Tieri is a decent writer and Mark Texeira is one of the more underrated artists still working today.

The issue starts off with Yogi Bear stealing a picnic basket. That pesky ranger is chasing him! He makes it to a waterfall and there is Boo-Boo. He escapes the ranger and it ends with the ranger swearing vengeance. What’s a poor ranger going to do? But then Boo-Boo disappears! And then, Yogi becomes distraught.

We cut to a bar and we see Slade Wilson  get into a big bar brawl. It’s beautifully drawn by Texeira. And then all of a sudden a paw taps Slade on the shoulder. It’s none other than Yogi Bear!

He needs Slade’s help to find Boo-Boo. Slade asks Yogi if he can pay.

We then see a funny page of what happens to Hanna-Barbera characters who don’t play Deathstroke’s prices.

They then get to Jellystone National Park and the place is in chaos! The animals are all like Yogi(talking etc) but they are all evil. Now, Yogi and Deathstroke team up with the park ranger to stop the chaos and find Boo-Boo.

And it only gets nuttier. The ending, taking place down in an underground experimental lab, is hilarious. This main story ends well and is quite a hoot. Texeira really kills it in the art department too, and this is his best work in years.

The backup story by J.M Dematteis and Tom Mandrake is just ok and doesn’t add up to much. It’s about Secret Squirrel and it’s a bore. The best part is the Tom Mandrake art.

This book though is all about the first story. And that story is a good read indeed.