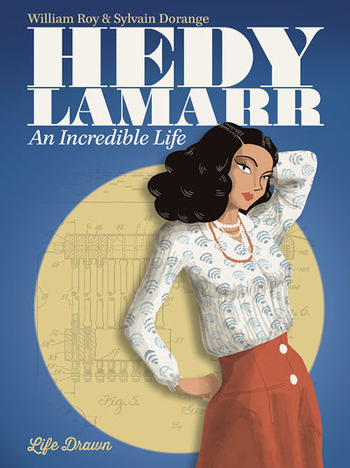 My father was in his early twenties when he saw Ecstasy, the controversial 1933 European movie that features teenage Hedwig Kiesler in not just a brief nude scene but also simulating an orgasm.

Although eventually banned in parts of the US, It’s all so NOT explicit that it could possibly be shown on broadcast TV these days with only a smattering of complaints. Back then, though, it was hot stuff!

SO hot that it led to a full-fledged Hollywood career for its star, as Hedy Lamarr.

Although she signed with MGM, she was first loaned out for Algiers, with Charles Boyer, which became an immediate classic.

Hedy—often described as the most beautiful woman in the world—was able to coast on her reputation for a decade before appearing in her other indelibly memorable role as Delilah opposite Victor Mature’s Samson in Cecil B. DeMille’s Samson and Delilah.

Oh, and did I forget to mention she more or less invented wi-fi along with helping the Allies win World War II?

In fact, it’s her latter-day reputation as an inventor that undoubtedly led to the current Hedy Lamarr: An Incredible Life graphic novel by William Roy and Sylvan Dorange.

As you might suspect from its title, this book chronicles Hedy’s life and career—or should I say dramatizes it—almost in the fashion of a movie script. It starts in the middle with her 1957 appearance on the TV panel show, What’s My Line?, offering a clever and apt introduction to its subject just as her big screen career was ending. Her last picture was made in 1958.

From there, a chronological series of incidents and anecdotes from Hedy’s life are shown, including scenes of her arms dealer first husband (of six) attempting to buy up and destroy all prints of the infamous art film, Ecstasy. The fact that this story may well be apocryphal (In 1939, Ecstasy’s director wrote that the husband had accompanied Hedy to the film’s showing at a Venice Film Festival and loved it. He said there was no truth to the rumors that he had attempted to buy up and destroy all copies.) adds to the feel of a typical Hollywood bio-film.

But unlike many another A-list star, Hedy Lamarr was not just another pretty face. She was a thinker, a tinkerer, and an inventor. The book shows us her frustrating attempts at trying to get people to take a beautiful actress’s inventions seriously, and in the end her surprise at finding out that the principles she discovered and pinned down could literally be said to be among the foundations of the Internet.

It’s a story that has deservedly gotten some traction in recent years, and this welcome graphic novel, translated from the French, offers an enjoyable tribute with some lovely art. I have trouble telling anymore if it’s actually painted or computer generated but whichever it is, it’s all done up in a lightly caricatured style rather than realistic, with creative use of color and at times lack of it. It works perfectly in this context.

Although a classic movie buff since the ‘70s, I’ve never been much of a fan of Ms. Lamarr, but I really think I’ve developed a whole new respect for her after reading this version of her story.