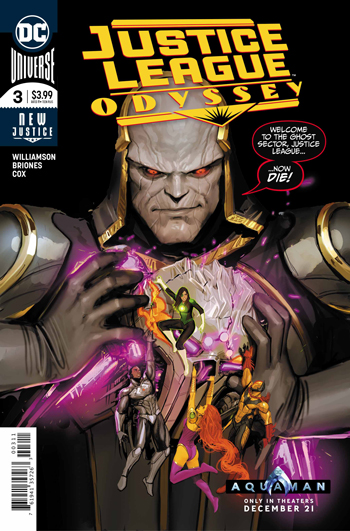 The girl’s really got a way with language.

The third issue of our brand new DC space odyssey is a welcome bridge from the initial revelations of the last two books to whatever action lies ahead.

Based on the last several pages of this book, that action promises to be very interesting indeed, and the fact that this now involves a number of awestruck Coluan refugees, makes that prospect even more intriguing.

Gotta wonder what a full interface with the worlds of the Ghost Sector is going to mean for Cyborg’s sense of self.

But first we have to deal with Starfire’s own interface with the god-tech found in the sanctum of one of the cultures who have apparently worshiped her for millenia within the imprisoned bottle galaxy of their Coluan jailors.

Which is still a completely outlandish concept, but one that is quickly gaining traction. In part that’s because this issue serves as a bit of a respite, with a few more storytelling elements brought into play, to get us, and the team, accustomed to the relative insanity of what they’re about to have to come to terms with.

That’s a credit to Josh Williamson, who manages to move quite a bit along without overloading us, with a deft confluence of driving plot devices, such as the need to find scraps of Coluan tech to get Braniac’s ship back in shape. At which point, the team finds more than just scraps of Coluan technology.

Good thing they’ve got Green Lantern Jessica Cruz on board. Good thing (probably?) they’ve got Darkseid Omega pacing their passage through the Ghost Sector. Even if Darkseid seems to think his machinations are more of an incentive for the team to work together than simple survival and heroism would dictate. But hey, Dark Ur-Gods – whattayagonna do?

We also begin to get a feel in this issue for the immense number and variation of the many civilizations the Ghost Sector is host for. There is serious potential there, and it’ll be great fun to see where Williamson may yet go with it all. These are worlds upon worlds upon worlds after all. One has to assume there is not only infinite beauty, but the possibility of significant darkness as well, throughout them all.

We see elements of both in this issue, something that new artist Phillipe Briones with the assist of colorist Jeromy Cox, realizes beautifully. Briones’ flair for staging and fine pencilwork lend a palpable sense of saga to this book and it works well. I’ll look forward to how that plays in the wonderland backdrop of next issue’s revelation.

What is that revelation? Well it was only a matter of time wasn’t it? With Colu, Darkseid, and an ancient legacy of impossible intergalactic deification all in the equation, it looks like Cyborg’s about to run headlong into Destiny.

Unless that’s all just another machination…

Next Issue: Machine in the Ghost Sector