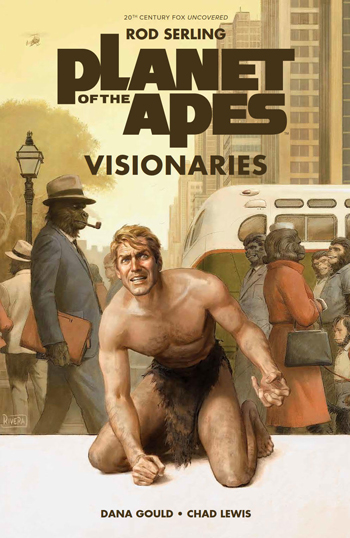 Have I ever mentioned that I’ve been a big fan of the original Planet of the Apes movies for almost half a century?

Almost…because I didn’t actually SEE the original 1968 Planet of the Apes until after I’d seen Beneath and Escape. I finally saw it in a triple feature, in fact.

When I DID finally catch it, one of my biggest surprises was that Rod Serling was listed as one of the scriptwriters. By that point, I was addicted to The Twilight Zone syndicated reruns so I certainly knew who HE was but I had NO idea he had written the script for this movie.

Turns out he didn’t. He had written a script for it. The first draft. As often happens, a lot of things changed between Rod’s typewriter and the 35mm screen.

From his Afterword, it sounds like Dana Gould and I had a lot in common regarding the presence of Rod Serling in our young lives. Gould was presented with the choice job of adapting Serling’s original take for this graphic novel— Planet of the Apes: Visionaries Rod Serling. He succeeds admirably.

In case anyone doesn’t know, all of the movies essentially jettisoned everything from original author Pierre Boulle’s novel except for a few of its most basic concepts. If his was the initial draft screenplay, then Serling was the man responsible for that.

Just a guess but I’d say the main reason the screenplay was amended was that the budget would have been blown had they shot it as it was. This book has the astronauts’ ship crashing on land rather than in water. They therefore have a high-tech vehicle to replace the long walks in the early part of the film. Later, there are ape cities that look much more like human cities than they do onscreen—just with apes. There’s one throwaway scene with monkeybar crosswalks! Genius!

While the first half of the book is largely similar to the movie but for the details, things then veer off into scenes similar to those later found in Escape, where the alien astronaut is wined and dined as both a curiosity to the public and a scientific anomaly.

That our hero doesn’t question the unlikely parallel development that gave the apes such things as books, guns, and helicopters is a bit of a stretch. Before his voice returns, he writes notes that the apes can read. They know English? And does he never look in any of those books? What ARE they? What language are they written in?

Solid, cinematic storytelling from artist Chad Lewis runs throughout this volume. My favorite aspect of the whole project is that they have based the character of Dr. Zaius not on the brilliant, complex performance of Maurice Evans that ended up in the finished film but rather on legendary actor Edward G. Robinson. Robinson had screen tested for the role in an early, unused version of the great John Chambers makeup. Had the Serling script been shot as written, it’s safe to assume Robinson might have played the role. Here, in an odd way, “he” finally has a chance.

Yes, there’s a certain statue at the end but the finale still manages to be much more downbeat than in the movie. Luckily, both writer and artist share some fun behind the scenes info at the back which takes us out on a brighter note.

In this article:Book/Comic Review, BOOM! Studios, Comic Books/Strips, Planet of The Apes