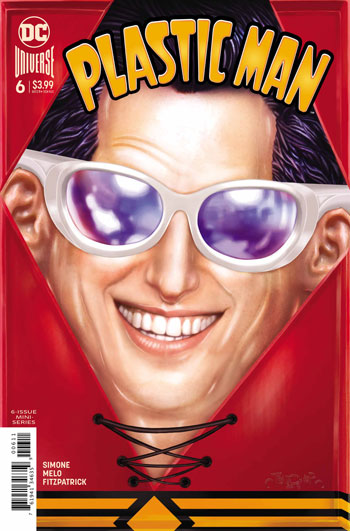 If you were looking forward to Plastic Man’s showdown with Granite Janet–like I was–you’ll be disappointed with Plastic Man #6, the final chapter in Gail Simone and Adriana Melo’s reboot of the character.

That showdown only gets teased, while the bulk of the book concludes Plas’ battle with the Cabal.

As it happens, the alien is a Durlan (a shapeshifting race, if you’ve forgotten your Legion of Super-Heroes lore), meaning Plas faces off with a cross between himself and something out of Parasyte.

Plas finally realized his on-again/off-again ally Obscura, a Spyral agent, was telling the truth about the Cabal, so he manages to use Dr. Psycho’s interference to his advantage, outsmarting him in able to force a final confrontation with the villainous group.

The best parts of the book come from this battle, although it ends with a clichéd standoff where hero and villains agree to leave each other alone.

The other dangling thread settled here is the fate of Pado Saskatoon.

Pado as a character has been a mixed bag. On one hand, he’s kind of annoying, thanks in large part to his use of “wang” as a catchphrase. (It’s like “fetch,” it’s not gonna happen.) On the other, he’s a trans character in a mainstream superhero comic whose sexuality hasn’t been the focus of hamfisted plots or crude humor. The problem with Pado is that he doesn’t sound like real kids, just a lot of wacky dialogue stitched together.

And then there’s the art. I’ve enjoyed Simone and Melo’s previous collaborations, but Melo’s work throughout this mini has been uneven. I like her pencils most of the time, but her inks are almost uniformly heavy. A lighter touch would have sufficed.

That lighter touch might have been what was needed, all told. I wish I could say I enjoyed this book more, especially as a fan of Gail Simone. There have been some intermittent laughs, and I can appreciate her trying to bring Eel O’Brian back to his roots as a heel-turned-hero.

However, her Plastic Man feels a little too much like her Deadpool for my taste, heavy on the neurotic quips and dramatic action but lacking some of the more inspired visual humor necessary for him to work. The series ends with another tease for a future fight with Granite Janet, but by the end, it’s my patience that was stretched thin.