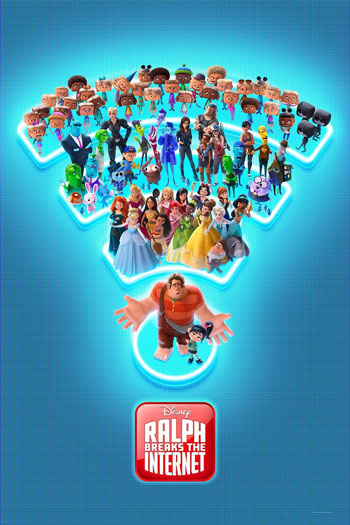 Wreck-It-Ralph was an enjoyably nostalgic mashup of some of our favorite arcade games, past and present, but the sequel, in which Ralph (John C. Reilly) and Princess Vanellope (Sarah Silverman) sneak onto the Internet to find a rare part to fix her broken arcade game, lacks the same sense of fun.

How exciting is it to go inside eBay? Or Yahoo? Or a search engine?

Answer: Not that great.

I never saw The Emoji Movie, but this feels like the same kind of corporate name-dropping. When watching Ralph and Vanellope bounce from one site to another, we’re keenly aware of all the corporate lawyers that had to sign off on being able to use these brands.

Unlike, say, the original Blade Runner, where actual company logos blend seamlessly into the futuristic urban background, here, the logos are the point. And it’s not much of a point. We’re nostalgic for games we played. For sites we’ve visited or shopped at? Not so much.

The best parts of the movie were already in the trailer, namely all the Disney princesses hanging out with Vanellope. The princesses’ special skills come in handy later on in the film – when, for once, they get to save a big strong man instead of the other way around –and we’re left wishing they’d been in the film more.

And we’re happy to see other Disney-owned characters pop up, like the occasional Stormtrooper or C3PO. But mostly it feels like the most cynical corporate synergy, simply ticking off boxes of all the various Disney properties. (The late Stan Lee makes a brief cameo in what appears to be the only Marvel reference.)

Besides the princesses, the other highlight is Ralph and Vanellope crashing a game called Slaughter Race, an amped-up, urban car game like Grand Theft Auto. In order to afford the part for Sugar Rush, they’ve got to steal the main character Shank (Gal Gadot)’s car, which is nearly impossible.

Shank and her crew (and the over-the-top nature of the game itself) provide some laughs. And the game also sets up the key conflict in the film: Once Vanellope has experienced the thrills of dangerous driving in Slaughter Race, can she go back to safe, predictable Sugar Rush?

Ralph, of course, doesn’t want to let his friend go. The message that you can still be friends even if you go your separate ways is hammered home in the most heavy-handed way. And an homage to King Kong goes on far too long.

While Ralph Breaks the Internet is intermittently entertaining (and features some entertaining new characters like Taraji P. Henson as BuzzTube trendspotter Yesss), the franchise feels like it’s running on fumes.