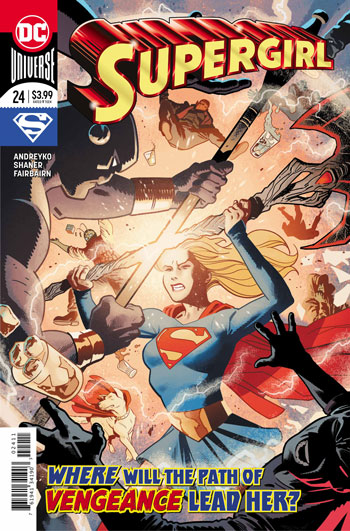 I have to say, I have to been enjoying this new direction for Supergirl.

I love that it’s tied into the latest Superman story with Rogol Zaar. Andreyko does a great job of tying it all in, but also giving the book at direction of its own. It’s a really wonderful thing.

Supergirl is hot on the trail of the group of killers known as The Circle. Apparently they are friendly with Rogol Zaar and Supergirl wants to find them to pump them for information.

Where does a girl start off?

Well, how about an intergalactic bar?

Andreyko takes Supergirl and puts her out of her element. The results are a lot of fun.

She runs into Ambush Bug. She sees what he might know about the whole thing. But there are forces at play in the shadows.

In fact, those forces seem to be watching Supergirl.

Could it be the people that she was looking for?

Andreyko and Shaner give us a story we haven’t seen for this character before. The imagery of Supergirl in an intergalactic bar is both fun and inventive but within the realm of reason. They just simply do it and gamely make it work. It’s really a cool thing to be able to see.

Eventually, the villains following her make their presence known. Kara fights back with a little bit of help. This action scene is wonderfully staged. Supergirl surprises the bad guys by having Rogol Zarr’s axe. She eventually escapes and takes a trip at the end to the “scene of the crime.” She goes to where Krypton used to be.

The story really cooks and moves fast. But Andreyko infuses it with a ton of  character development along the way. The art compliments it well.

It’s all leading to the big 25th issue next month. I’m as excited as can be for it.