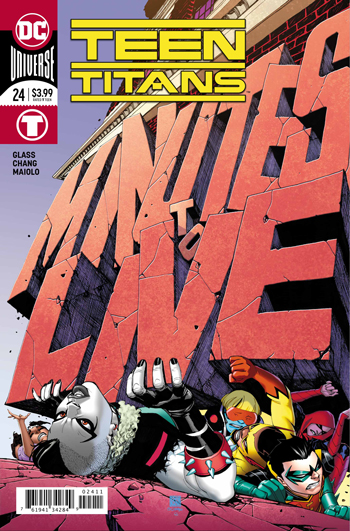 “I told you. It’s complicated!”

Lots of that going around.

If we’ve learned anything about these new Titans kids, it’s that they all seem to have secrets. Issues, histories, family dramas, and… secrets.

That’s OK. Good for the dramatic tension. Not so good for team dynamics maybe.

If only everyone had the same outlook as Crush. She doesn’t really give a damn. But then, not everyone has Crush’s… aptitude either. And right now, that aptitude is the only thing keeping a 16-story apartment building from coming down on top of the rest of the team.

Leaving them all just enough room to bicker.

It’s something Adam Glass seems to do well – creating tight, pressure packed situations, with just the right play for a dramatic ping-pong of team interaction. It sure makes for great dialogue and great character development. Wind ‘em up, and watch ‘em go.

Although in this case they can only afford to let loose with words because, you know, anything more active will bring the house down. Something Bernard Chang captures well with his dynamic style, and breakdowns that suggest just how close to the breaking point everything is.

Certainly not the most comfortable way to build team confidence, but it gets the job done.

That seems to be all that matters to Robin. It shouldn’t be of course. Any really good leader, the way things stand after this issue, would take all that momentum and drill down into some of these… complications, that seem to surround (and even permeate) his teammates – you know, the ones that might be important for everyone to know about should they ever suddenly find themselves with their backs unexpectedly against some part of the wall again.

Which I’m guessing is pretty likely.

Too bad Damian’s got some of the biggest secrets of all. Kinda hard to build trust when you can’t lead by example. Interesting how, despite herself, Emiko keeps on backing his play. Long as he keeps moving them forward. Long as she can keep on riding Kid Flash.

One step at a time I guess. What we do have after this issue, is a team that is at once, more bonded, and more on notice. Now they know they all have secrets, and now it matters more to them.

Not just because it’ll improve their odds of survival. But because, whether they know it or not, they’re all becoming more and more like… family.

Though Djinn could use some pointers on a better Keep Out sign for her door. Speaking of secrets…

Well, guess it’ll all work out. Really, maybe they should just be all a little more like Crush. Who cares about all those secrets, and all that B.S.?

Next Issue: So, speaking of family drama…