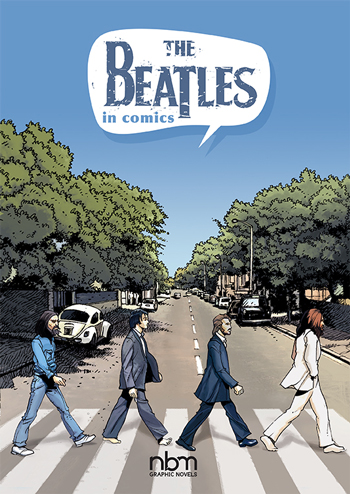 In February of 1964 the Cincinnati Enquirer derided TV host Ed Sullivan for presenting the Beatles’ live US television debut, “acting as if the occasion was one of the most vital and important of the year.” In the long run, of course, it was!

Here we are 54 years later. There has never been a period since that evening when The Beatles and their music have not been a major part of the pop culture fabric of almost the entire world.

Case in point today is a European graphic novel from NBM called The Beatles in Comics. There have been a lot of comics-related projects about the Fab Four in recent decades and a number of Euro-graphic novels.

What’s different about this one is that it’s not another straightforward retelling of The Beatles’ story but rather an anthology presenting 24 comic strips illustrating various historical moments and/or anecdotes. Page lengths vary as a selection of European cartoonists—not a one of whom I was familiar with before this—caricature John, Paul, George, and Ringo in a dizzying array of styles. Some of the individual stories presented in more or less chronological order are Shea Stadium, John’s “bigger than Jesus” remark, India, Brian Epstein’s death, Paul McCartney’s death (!), Yoko, and the Get Back sessions.

The names of some of my favorite unfamiliar-to-me illustrators here are Amandine Puntous, Pierre Brallion, Anthony Audibert, Laurent Houssin, and Richard Di Martino, but all of them are impressive, many with experimental styles reminiscent of early 1970s underground comix!

Each segment is preceded by a text and photo section discussing the situation about to be drawn in the following pages. A big Beatles fan will recognize that sometimes they go with the legends rather than the facts and this, too, is at times repeated in the comic strips, too. I think that in itself says a lot.

At this point in the 21st century, The Beatles have long since transcended the simple truths of their own story. There have been thousands of books about the group and its music, the individual members’ lives have been examined under a microscope over and over again.

There have, of course, been other rock groups but only four people will ever know what it’s like to have been The Beatles, and two of them are no longer around.

Someone once wrote, “When the legend begins the truth, print the legend.” The Beatles in Comics presents 24 takes on various Beatle legends….and it does that very well.