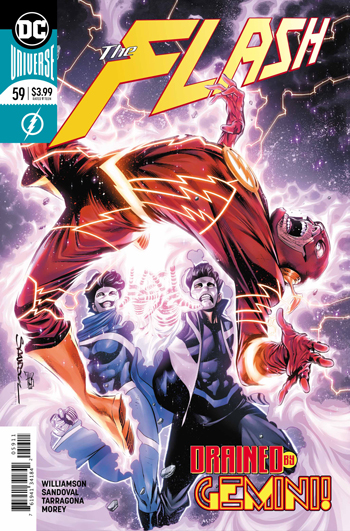 So this is a continuation from last issue where The Flash goes to Gorilla City.

So, as I’ve said before, if you put Gorilla City into a comic book, I’m there. No matter what comic book it is, I’m there.

And this issue has Gorilla City in spades.

Williamson opens the issue with a flashback in the city! It has The Flash taking to the good King Solovar. They are grateful that The Flash has helped the city be free!

It’s a joyous scene! With an opening like this, you just know that it isn’t going to last.

And of course, it doesn’t.

We then cut to present day where Gorilla City is in ruins. What happened here?

Well, it’s up to The Flash to figure it out! He has to figure out too what happened to his friend King Solovar. Williamson keeps the issue loose and enjoyable as Barry tries to keep everything together and figure out the mystery.

Through the issue, Barry fights robot gorillas(which is amazing) and tries to piece together what happened here. With it, he also makes a discovery of just what the Speed Force is and how it’s affecting him. The answers are quite surprising.

The end of the issue has a new threat that is introduced to the comic. It’s a hell of a threat too and makes one incredible entrance. Will the Flash survive this? Or is this the end for Barry?

I love the art by Sandoval. He has such a great design sense and may be the best artist this title has seen in quite awhile. This is a fine book. It’s also another great chapter in the overall story.