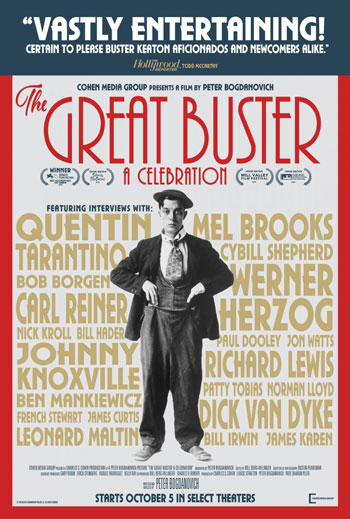 Acclaimed writer and director, Peter Bogdanovich, whose knowledge and writings on the history of Hollywood has garnered almost more recognition than the actual films he has made, has created a wonderful love letter to “The Great Stone Face” himself, Buster Keaton.

As documentaries go this one is really well done. I think it help that Keaton’s life was almost as incredible and fantastic as the films he made in the early part of the 20th century.

Beginning with his birth in Kansas while his parents were on the road performing their Vaudeville act “The Two Keaton’s”, Joseph Frank “Buster” Keaton quickly became the star of his parents act once he was old enough to walk.

Taking us trough his rise in Hollywood’s silent film era, through the time of the “Talkies” and his subsequent downfall when he signed a contract with MGM, Bogdanovich is both storyteller and historian letting most of Buster’s own films speak for themselves and letting the audience really absorb the genius of this great master filmmaker.

Buster’s high’s and lows are all covered utilizing anecdotes from those in the industry whose careers wouldn’t have existed had Keaton not broken his Broadway contract to star in his first film with Roscoe “Fatty” Arbuckle in The Butcher Boy.  Comedy legends, Mel Brooks, Carl Reiner, as well as newer performers including Bill Hader and Nick Kroll, all share how his films have influenced them. Quentin Tarantino, Jon Watts, and Werner Herzog all talk about his influence in the art of filmmaking and how to this day his films continue to be instrumental in the craft.

Going into this film I have read numerous books and essays on Keaton’s life. He is one of my favorite directors and whom I consider to be the greatest comedian of all time. Bogdanovich has distilled the best of Keaton’s life to what the title says, “a celebration.”

That is not to say he doesn’t skip over the tragedy and the mistakes and the heartache he suffered. It doesn’t dwell on those aspects though. they are more like a contrasting agent to show the triumphs and the accomplishments of this veritable and astoundingly athletic and hilarious actor, writer, producer and director, who at one time made some of the greatest films in movie history.

From 1920 to 1928 Keaton made 19 two-reel short films and 11 feature films that are some of the greatest film comedies of all time. Films like One Week, The High Sign, The Playhouse (where he plays every character) and The Balloonatic are where he created and honed his craft, as well as engineered some of the most technical and complicated stunts in Hollywood history up to that time.

Even to this day I marvel at how he accomplished some of the effects and set pieces and performed the stunts he did. In features like Sherlock, Jr., The Navigator, The General and Steamboat Bill, Jr., Keaton takes what he had learned doing shorts and expands them into cinematic marvels. Stunts, story and the scope of some of the films are on the scale of D.W. Griffith’s cinematic epics and Gone With The Wind. The General is considered a masterpiece and, in my opinion, one of the must see films before you die.

Bogdanovich does a wonderful job at being thorough without lingering too long on one thing or time in Keaton’s life, letting each moment have its just due and then wishing us off to the next; really showing the scope and breadth of Keaton and his amazing stunts, perfected comedic timing, the frustrations of a career he sacrificed despite his own best interests. Bogdanovich shows the loving, and generous man juxtaposed by the no nonsense focused filmmaker and how sometimes life imitated art and vice versa.

Keaton’s personal life is a Hollywood movie in of itself. From the peak of fame to the valley of depression and bankruptcy to the late life recognition and reclamation of his own self. He never stopped working. He never stopped loving. In fact, some times he loved too much. The Great Buster: A Celebration is just that. a loving look back at a man whom without we may have not had the films we do today broken bones and all.

I hope that this film actually gets more people interested in Buster Keaton. He sometimes gets lost in the giant shadow of Charlie Chaplin. I think mostly because his light in cinema flickered out with the coming of talkies and poor business decisions which cost him creative control.

I hope you see The Great Buster: A Celebration, if for no other reason, than to marvel at some of the spectacular visual filmmakers ever. No wires, no camera trick, no special effects, no digital trickery. Buster Keaton was the real deal.

Bogdonavich knows this and has done a pretty wonderful job at capturing and streamlining and presenting his career and life in a way that makes it accessible to modern audiences young and old. Come and marvel at a master at work.

The Great Buster: A Celebration is playing in limited release.
For screening information, click HERE.