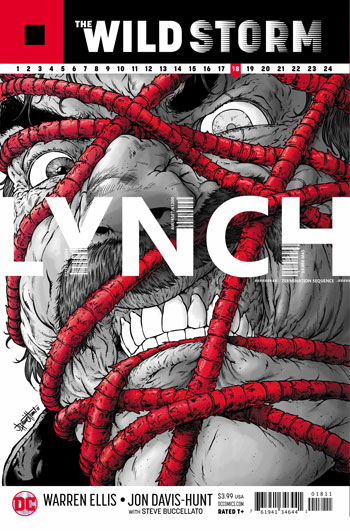 This has been a great run of books!  I love this story. I’m incredibly sad that it will be wrapping up in a few issues.

Warren Ellis has taken the old Wildstorm characters and made a seamless story with them. I’m honestly blown away at the level of thought that went into writing this. It’s truly something to talk about.

The opening sequence has Miles talking to Jackie. Miles basically recounts the previous seventeen issues. Then, Jackie issues him a challenge.

A gauntlet is thrown down. It’s both funny and ominous.

It also sets up the rest of the storyline.

The next scene has Henry Bendix and Dr. Helspont having a meeting. Bendix has come down to check up on his experiments. He put his implants into subjects and they are having a strange effect on some of them. Where will this all lead to?

We are on the cusp of finding out.

There is a little more set up and then the centerpiece battle happens. John Lynch catches up with Marc Slayton (Backlash) and they have a fight on the side of a road. It’s a beautifully brutal battle that Davis-Hunt brings to life with his art. He really is at the top of his game here.

Lynch sends Slayton to New York City for a purpose. But what is it? There are some other crazy subplots. It all leads to a cliffhanger ending that is just insane. Bendix’s plan is coming to fruition and it’s a scary scene!

This is one of the best consistently great creative teams out there. This book has kept me enthralled from the very beginning. It’s tops.