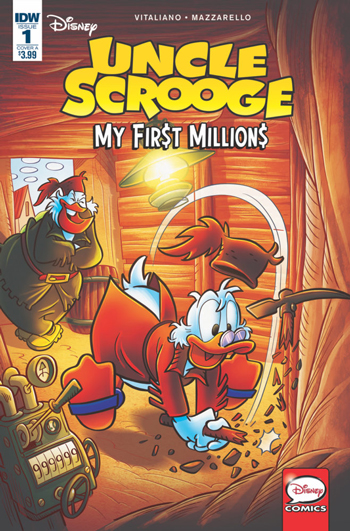 Unlike many Disney fans my age who cherished the duck stories of “the Good Duck Artist,” Carl Barks, as children, I never really paid any attention to Disney comics until I was 27 years old and became enchanted by the works of the OTHER Good Duck Artist, Don Rosa.

From there, I purchased a lovely oversized collection of Barks classics and I’ve been a fan ever since, through Gladstone, Gemstone, Disney, BOOM!, and whoever else has carried the Disney license.

At this time, that would be IDW and they’ve finally gotten around to my very favorite Disney comic book character—Scrooge McDuck.

With probably thousands of adventures out there in dozens of languages, as well as being the star of not one but two versions of the hit Duck Tales animated series, Scrooge is probably the most well-rounded Disney character of them all.

IDW’s Uncle Scrooge: My First Millions #1 continues the tradition of offering translated European Disney stories, in this case an Italian story from 11 years back. I wish I could say it’s a great debut but I’m going to have to settle for “promising.”

The art, by Marco Mazzarello, isn’t bad at all but it’s cartoonier than traditional US Scrooge stories, more in the manner of the little Disney digests put out in the 90s which also featured European translations.

The actual story, about how Scrooge earned his first million, is yet another flashback to his Alaskan Gold Rush days. Some good gags here and there but nothing new, really.

All in all, as I say, it’s promising! Uncle Scrooge is back and that in and of itself is cause for rejoicing!

On that alone, Booksteve recommends!