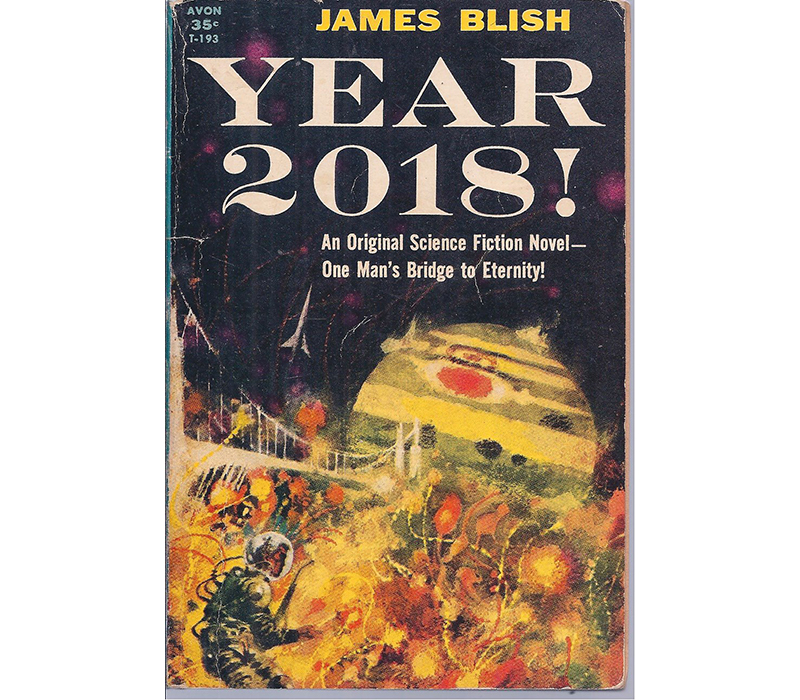 In 1956, science fiction author James Blish, who would later go on to novelize the original Star Trek series, wrote a book called Year 2018!

It’s easy to make fun of how much Blish got wrong about this year, most notably, there is no colony on Jupiter’s moons using remote controlled devices to build an ice bridge on the big planet, but it’s alarming what he nailed perfectly. Blish predicted the western world would embrace a fascist devotion to censorship leading to scientific stagnation due to secrecy. During this lack of science came a rise of the religious right.

Well, he got the Jupiter bridge stuff wrong anyway.

Part of the fun of sci-fi and fantasy is the gamble writers and filmmakers take predicting future events. The obvious examples come from books named after years like 1984 and 2001, etc.

Arthur C. Clarke, along with the rest of the world, have seen, both 2001, and 2010 for that matter, come and go without an ominous black monolith, although a mysterious black sarcophagus was unearthed in Egypt earlier this year filled with red goo and skeletons, it doesn’t get any more sci-fi than that! A good argument can be made however, for Alexa and Siri being related to the evil computer HAL. 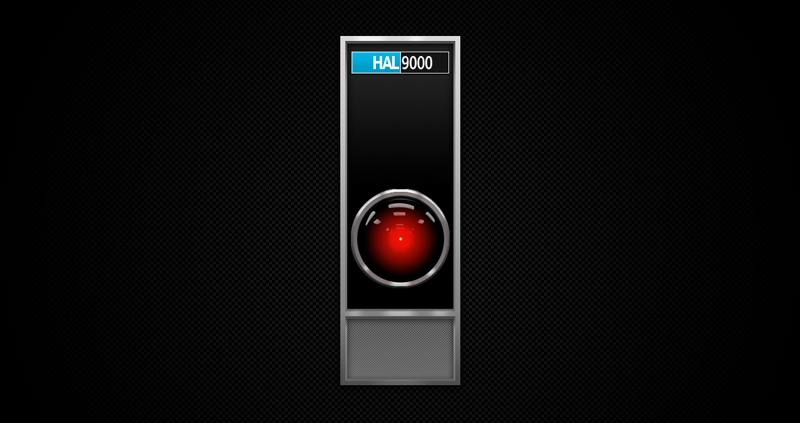 An even better argument can be made for the emotionless voice of Alexa and Siri being direct homage to the late Douglas Rain’s brilliant voice over of HAL9000. So, in this instance, Clarke (and Kubrick) didn’t predict the future, they directed it. But they did miss the year.

In film, perhaps the most incorrect future prediction goes to the John Carpenter’s Escape From New York. The 1981 cult classic presupposed a 1997 that saw crime rise at such an alarming rate all of Manhattan island became a maximum-security prison. Carpenter’s film predicted an ongoing conventional war with the Soviet Union of which the film’s anti-hero Snake Plissken, played with Clint Eastwood flair by Kurt Russell, was a veteran.

On television, a mini series from 1993, that many people never heard of, called The Fire Next Time, predicted what the world would be like in 2017. The Fire Next Time, not to be confused with the brilliant James Baldwin book of the same name, was about one family dealing with a world ravaged by global warming. While the events portrayed didn’t occur, as such, the science of the series was sound. Interesting side note, The Fire Next Time is one of Paul Rudd’s (Ant-Man) earliest performances. 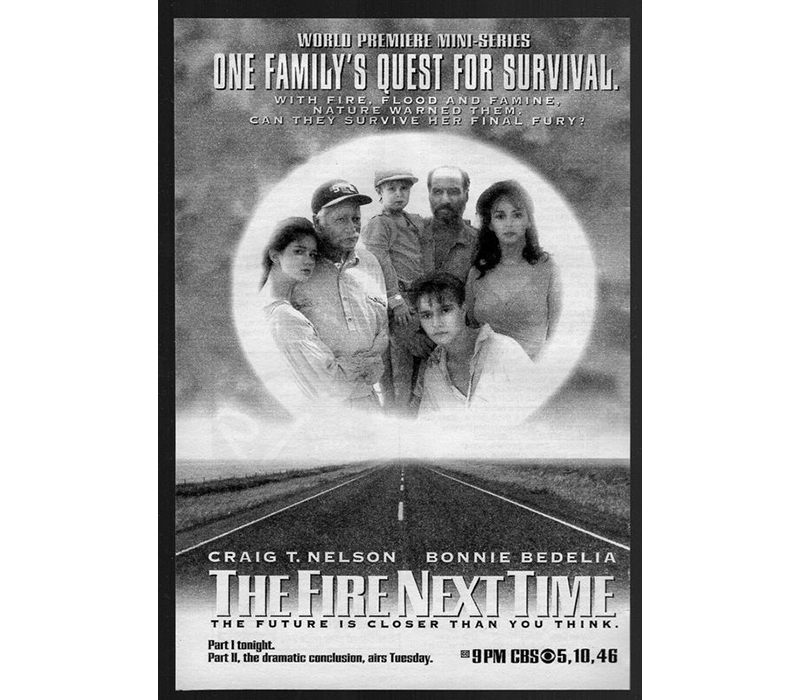 So why did a group of brilliant authors and filmmakers get the future so wrong? Many people would argue they didn’t, but on its face let’s examine the reasons.

James Blish writing Year 2018! (yes, the title has an exclamation point) in 1956 explains the ice bridge on Jupiter. As early as the 1940’s the National Advisory Committee for Aeronautics, or NACA, began conducting supersonic research. With air flight records being set and shattered by the likes of Chuck Yeager and Scott Crossfield all throughout the 1950’s, it only stood to reason we’d be on Jupiter by 2018.

Only two years after his books publication, in 1958, NACA became NASA. From NASA’s beginnings with the Mercury, Gemini, and Apollo programs, the last of which resulting in American astronauts walking on the moon, Blish surely must have thought his vision was in the clear. The last astronaut, Eugene Cernan, walked on the moon three years before James Blish died in 1975.

Arthur C. Clarke’s vision of the future made even more sense. 2001: A Space Odyssey, his seminal 1968 novel, predicted a 2001 with commercial space travel and artificial intelligence. At the time of his novels publication NASA was in its heyday. By the end of that same year, Apollo 8 would have a successful journey around the moon, and less than a year later, Apollo 11 would make history stepping foot on it. Clarke’s predictions, far less fantastical than Blish, made sense as the world of science was literally advancing at a pace not seen since the Wright brothers. 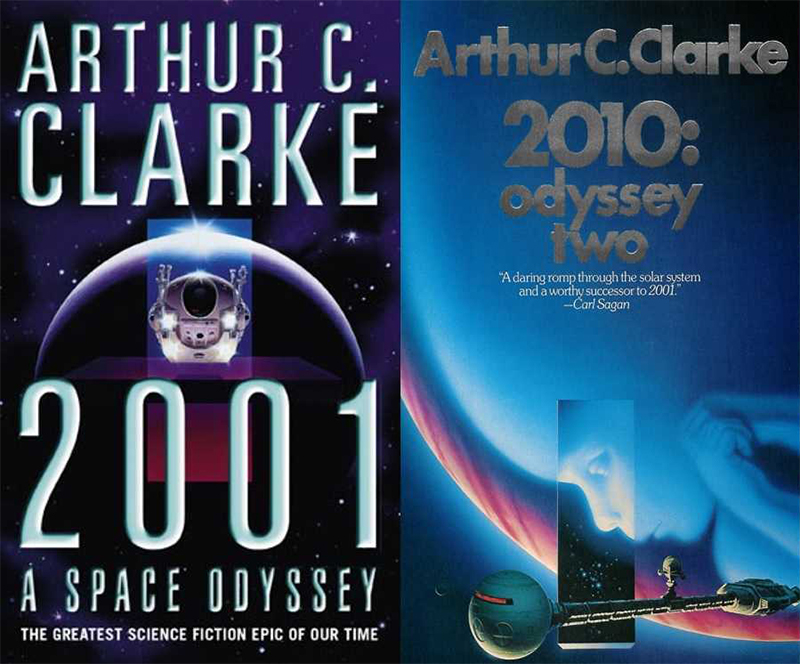 Clarke’s sequel 2010: Odyssey Two, written in 1982, was essentially a Cold War novel. It predicted an ongoing Cold War, the politics of which, would reach all the way to the joint space mission between the U.S. and the Soviets. Although a joint mission between the two superpowers already had taken place in real life, with the great handshake in space aboard the Apollo/Soyuz mission in July of 1975, Clarke had no way of knowing about Glasnost and Perestroika, only seven years after publication, essentially putting an end to the Cold War.

Clarke did write another predictive book four years later in 1986, entitled, Arthur C. Clarke’s July 20, 2019: Life in the 21st Century. The title is meant to directly coincide with the fiftieth anniversary of the moon landing and his prediction for what the world has in store. This book is tough to find but I hope you do, it’s a riot, then again, it’s still a year away, so who knows?

Like 2010, Carpenter’s Escape From New York fed into the Soviets as a major American fear. By setting his film in the not too distant future, John Carpenter painted a bleak vision of 1997. While I don’t think Carpenter was predicting a true future, meaning one he thought would actually happen, he made a powerful comment on the present.

The Fire Next Time, which recently found its way to DVD, predicted a world that ignored the warning signs of climate change. At the time of this television mini series creation in 1993, climate change was not a partisan issue and both sides of the political spectrum agreed with the scientific study of it. Al Gore, who would later go on to win the 2006 Oscar for Best Documentary Feature, for his film An Inconvenient Truth, was Vice President at the time. The acceptance of this science, and the dire predictions it gave, could have easily led this mini series future version of 2017. With the rise in fires, tornados, floods, and hurricanes, especially ones like the devastation caused by Katrina, some people think they got more right, than wrong.

Comic books had long been in the game of future prediction. 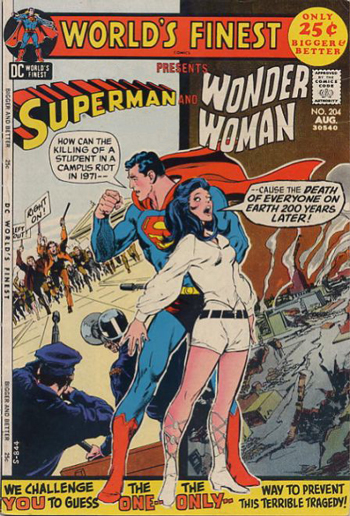 Issue #204 of World’s Finest presents Superman and Wonder Woman, with its fantastic Neal Adams cover, depicts a split screen image, with both heroes looking into the present, and the future. The heroes exclaim, “How can the killing of a student in a campus riot in 1971–Cause the death of everyone on Earth 200 years later!”

This issue, written by Dennis O’Neil, is a brilliant example of science fiction predicting the future without really predicting anything. The deaths of the future people of Earth in 200 years notwithstanding, isn’t what’s compelling here.

The drama, in this case, comes from the present. The 1971 campus riot story mirrored what was happening all around colleges and universities throughout the country in response to U.S. involvement in Vietnam.

At the time this issue debuted in August 1971, the tragedy at Kent State, which happened one year earlier, was still fresh in people’s minds. Assigning a deeper meaning to a similar killing as having extremely dire repercussions for the fate of man, not only predicted the future, it gave more weight to the present. In this, “what if? Dickensian” realm of future predicting, O’Neil illustrates how important the present really is, and how it has far reaching consequences.

In film, Back to the Future II (got a lot wrong but accurately predicted the Cubs winning the World Series) and in television, seek out the last season of Parks and Recreation (although I recommend the entire series) for their take on a short time jump forward.

No matter the medium, no writer predicts the future better than The Simpsons. There’s a great video you can watch on this, I started off laughing at it, by the end, I was sure The Simpsons writing staff all must be direct descendants of Nostradamus.

In this article:Books/Literature, Movies/DVD, Science Fiction, Technology, Television, The Future