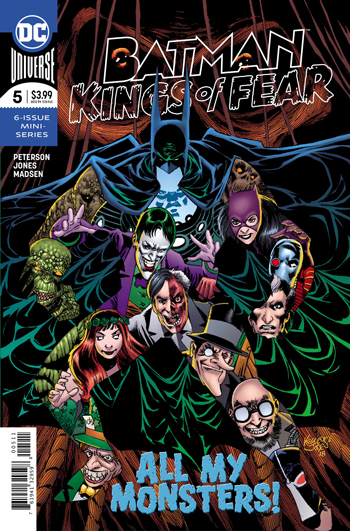 This has been a series that I wasn’t too excited about initially, but it has won me over since with a strong story and some really excellent visuals.

Having now read this fifth chapter of the story, I am thinking this might actually end up being a classic. I definitely want the hardcover when it’s collected eventually.

The Scarecrow starts the issue off showing Batman what Gotham could have been like had he not been there. Batman doesn’t readily understand, so the Scarecrow probes it deeper into his psyche. The psychological aspect of both the writing and art work at a high level in this instance.

Batman then fights and makes short work of Killer Croc.

What is the Scarecrow actually after? Will the fear he has dosed Batman with wear off anytime soon? Where is this all going?

Peterson writes an amazing story. It’s an emotional ride into the deepest recesses of Batman’s mind. Eventually the hallucinations get so bad it becomes borderline insane. Batman eventually comes to the conclusion that he made Gotham the way that it is and that it’s all his fault. He even says that he should never have become Batman. This issue ends on one of the darkest notes I’ve been seen in a comic book.

None of this would work without that art by Kelley Jones. Jones gives his artwork feeling, emotion, and an expressiveness all of it’s own. It’s beautiful in its creativity and the colors really pop as well. This is a descent into madness and it takes that decent very seriously. And that’s something to truly be commended. This is simply a comic book that is fantastic.