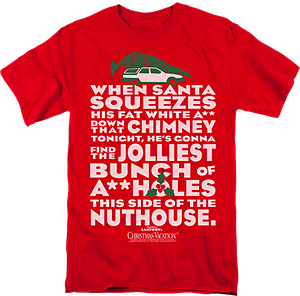 With Chevy Chase and Beverly D’Angelo reprising their roles as Clark and Ellen Griswold, Juliette Lewis and Johnny Galecki co-star as their children Audrey and Rusty. Also on hand are Randy Quaid and Miriam Flynn as Cousins Eddie and Catherine and some of the most talented character actors in film and television including John Randolph, Diane Ladd, E.G. Marshall, Doris Roberts, Julia Louis-Dreyfus, Brian Doyle-Murray, William Hickey and Mae Questel.

This officially licensed 100% cotton tee bears the rant delivered by Clark reaches his breaking point with a house full of relatives and news that his expected holiday bonus was cancelled.

“When Santa squeezes his fat white ass down that chimney tonight, he’s gonna find the jolliest bunch of assholes this side of the nuthouse!” 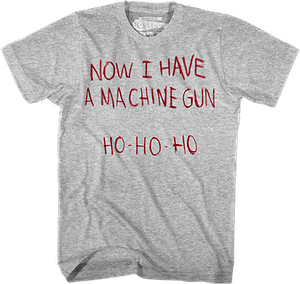 Regardless of whichever coast you’re from this Die Hard shirt is perfect for getting together and having a few laughs.

Forget your troubles with your estranged wife, slip on this shirt and make fists with your toes.

But, if a bunch of thieves disguised as terrorists make themselves know to you, take to the air ducts and start picking them off one by one.

As he picks off Hans Grubber’s henchmen, he leaves a note written in blood and scratched across the sweatshirt of one of them; sending a message to let Hans and his minions know what their night is just beginning.

From the cult classic Tron, this shirt bears the logo of Flynn’s Arcade, owned by Kevin Flynn. In addition to running the arcade, Flynn works as a computer engineer at ENCOM, where he has learned that executive Ed Dillinger has been stealing his work.

Flynn hacks the system and becomes Clu, an avatar in a digital world, where he fights against Dillinger’s avatar, Sark and the Master Control Program. Teaming with Tron and Yori, Clu becomes a freedom fighter for the Users, the oppressed programs of the grid. 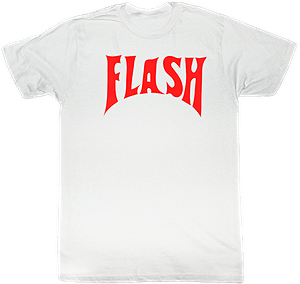 f you know me then you know there are few things I love more than Mike Hodge’s 1980 film, Flash Gordon.

From the amazing sets and costumes, to the over the top script to the spectacular music by Queen, the film is a rich science fiction treat that delivers from our own planet Earth (and obscure body in the S-K. System) all the way to the many kingdoms of Mongo (Hail, Ming!). This shirt, worn by the film’s hero, football player Flash Gordon, New York Jets deserves to be owned by every man, every woman, every child in honor of our savior of the universe, king of the impossible…Flash! 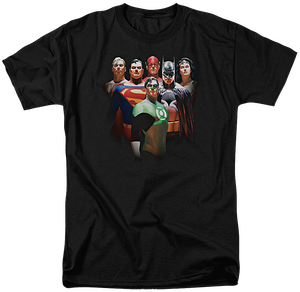 Painted by Alex Ross, this shirt depicts the pantheon of the world’s greatest DC Comics superheroes as if they existed in real life. On the black 100% cotton shirt are the most realistic depiction of the Super Friends Justice League committed to the comic page.

Here you’ll find Superman, Batman, Wonder Woman, Green Lantern, The Flash, and Aquaman. And keep in mind, this isn’t a mere depiction of Henry Cavill, Ben Affleck, Gal Gadot, Ryan Reynolds, Ezra Miller and Jason Momoa, but rather the iconic versions known worldwide for both their mythology and adventures. 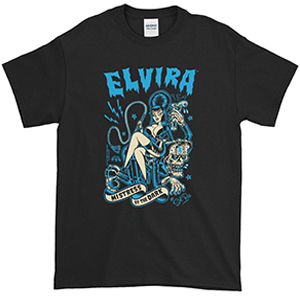 An actress and model since she was 17, Cassandra Peterson became the horror host known as Elvira way back in 1982. Since then, the pop culture icon has appeared as a horror host, a television personality, the star of two films a spokesperson and as a recording artist.

In addition, Elvira has appeared across media as the star of comic books, video games, novels and coffee table books.

This shirt, illustrated by rockabilly artist Sol Rac, captures the Mistress of The Dark in an awesome pop art depiction. 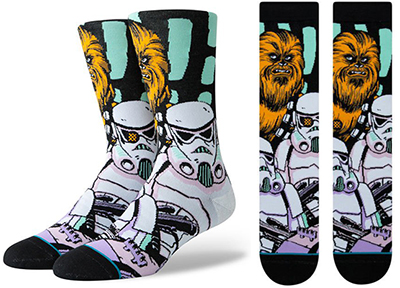 Everyone’s favorite Wookie, Warped Chewbacca captures our hero in the midst of his Star Wars: Episode IV rescue mission to save the Princess. Laugh it up, fuzzball. 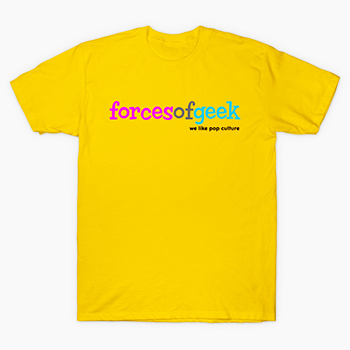 Well then, don’t waste another moment and add our upcoming logo to your wardrobe.

Made from 100% cotton, this shirt let’s the world at large know that you “like pop culture.”

In this article:2018 Holiday Gift Guide