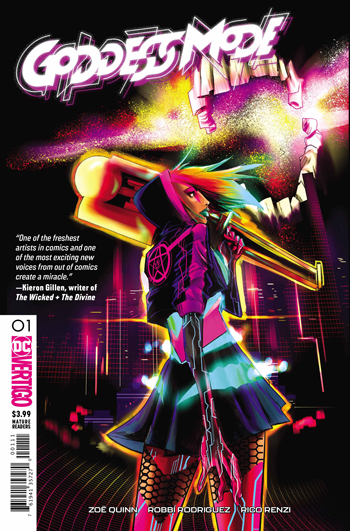 Goddess Mode #1 is a little part Jem and the Holograms, one part Gibson’s Neuomancer, a sprinkling of Blade Runner, and healthy smattering of designer Lisa Frank all mixed up in a cyber fairytale.

In the uncertain future, Hermeticorp™ via the Azoth, a nanotech based “super internet”, that is everywhere, runs everything.

They control what you see, how you feel and how you live. We join the story thrust into the middle of a battle with a hapless hacker named Casandra Price and the all powerful AI, Azoth. It is unknown what is truly going on until we zip back into a flashback to what led up to this kerfuffle.

We now see Ms. Price as she hacks in to see her comatose father, in a secretive med chamber.

Here we find out about the word and what has brought him, and her, to this place. He is the former CEO of the very company that controls everything.

A victim himself of a horrible cyber virus called Tucker Brady Syndrome not even he, the most powerful man in the world was exempt from its evil ravaging. She is eventually discovered and brought before the Head of Secrurity, Clive Benson. He eventually promotes Price to discover the cause of the widespread attack on Hermeticorp’s med pods and systems all over the Azoth.

In her search she discovers a mysterious source code that when touched sucks her into, what seems to be another dimension. A dimension that is equal parts magical and digital. There she meets three powerful women whom ask her to join them in the fight to fix the world.

Beginning this book I wasn’t overly taken with the story and the art style, however as I read it I loved it more and more. Rodriguez’s dynamic art style is perfectly suited for the magically digital visual representation of Quinn’s vision. He balances the harshness of the “real world” with that of the Azoth realm.

What did grab me immediately was colorist Rico Renzi palette. It is a perfect blend of dull muted browns and grey in the real world versus the Lisa Frank explosion of color in the Azoth we get in the opening few pages, giving the reader a very Matrix-like dichotomy of worlds. The story becomes very compelling and I found that after my initial nonplussed feeling I actually began to care bout Cassandra and what is happening to her, and the world as a whole, around her.

This new title from Vertigo has me hooked enough to want to read more and see where Quinn and Rodriguez decide to take me. I am looking forward to seeing the next issue as this one is definitely a “set up” book for a much bigger and exciting story with just enough morsels to create intrigue and desire to find out what happens next.

And isn’t that what a good comic book is really all about?