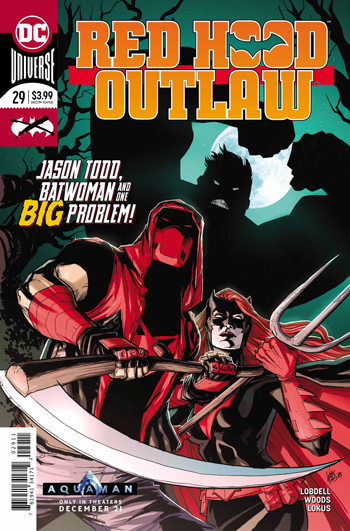 I’m so excited with how great this title has been. In the last issue, Jason went to a town and got into a bit of trouble with some scary residents of the town of Appleton. This issue picks right up where that story left off. The best part is that Jason has been joined in his fight against the scary town denizens with Batwoman. And she’s not in a good mood.

Scott Lobdell does a great job as usual writing the Red Hood. He’s also got the characterization of Batwoman down as well. The first few pages are of the pair fighting this disfigured monstrosity. It’s a brutal fight that they try to escape. But this monster isn’t letting up.

The entire issue becomes one big fight scene with some backstory peppered in. And I’m okay with that! Lobdell keeps the story exciting and fast. The brute that follows them is insane and very angry!  But the Red Hood and Batwoman have a mission and they won’t be stopped either! These two have been banished from Gotham, so they immediately have a bonds

This also leaves them at odds with the rest of the town of Appleton as well. They have a confrontation with them. Apparently, they’ve angered the residents! The rest of the issue is the duo trying to escape with their lives.

The writing is fast and fun. None of it would work as well without the dynamic art of Pete Woods. He keeps the storytelling clean and clear and it’s just plain awesome. He’s a great addition to an already good  book. This is another damn fine issue.