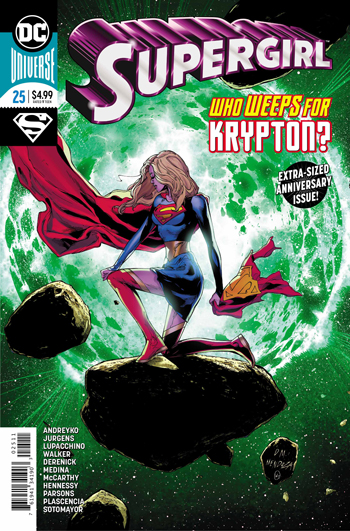 This is an anniversary issue for Supergirl.

The main story by Marc Andreyko deals with Supergirl, Z’ndr and Krypto returning to the scene of the crime. That’s right, kids.

They are headed out to where Krypton used to be! It an emotional and powerful story that Andreyko writes. He does so extremely well and thoughtfully.

While she’s out there, she comes across a new villain by the name of Splyce. Supergirl fights against this crazy villain and they toe go toe to toe. Splyce is pretty brutal too and doesn’t go down too easily. She fights, but there is another aspect to this story.

Kara goes back in a flashback to before the destruction of Krypton. She sees her father. She learns a secret that throws everything she has ever known out the window.

How is she going to seal with this new knowledge?

And what does Rogol Zaar how to do with it all?

This is an important chapter in a great and exciting storyline.

So after that first story, we get some additional ones. The first one is called Z’ndr Kol and the Lost Colony. We learn a little more about the Z’ndr Kol character here and it’s a welcome story, especially because he’s playing such an integral part in the main storyline currently.  This one is written by Andreyko and it has some really great artwork by Brad Walker.

The last story by Dan Jurgens and Thomas Derenick doesn’t fare as well. It’s a completely different story tonally than the other ones. It’s literally about Supergirl helping some orphans near Christmas. It’s not bad it’s just a strange place to have the story.

All in all, however this is a decent book and the first two stories shine brightest.