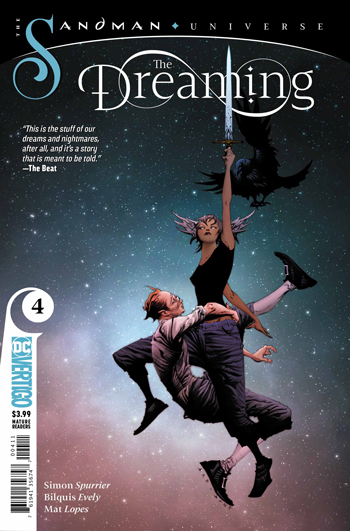 I’m just going to come right out and say it: This is the best of the “Sandman Universe” titles. Simon Spurrier has taken what Neil Gaiman has done and put his own stamp on it.

It’s well done in a new way that I wasn’t expecting. It’s also highly enjoyable overall.
This issue starts off with another of my favorite characters, Cain, becoming the makeshift narrator of the issue. He sets things up in a unique way. Spurrier does a great job of making sure everyone is caught up while advancing the story. And graphically, Evely does a downright amazing job again here. They just clicked as a creative team early and just hit the ground running.

We see the new law person in the dreaming, Judge Gallows, surveying the land. He is not happy with the way things are being run. He needs to clean the place up. So he demands that they release the Baku. The Baku is a hell of an entity as we quickly find out. All of the Dreaming sees this beast work, and it has a voracious appetite. They are terrified of it and deservedly so.

The rest of the issue has Lucien, the librarian, showing Judge Gallows around. They survey the entire dreamscape. And the judge wants to make some drastic changes quickly. This does not bode well for any of the denizens of the Dreaming.

This also shows Lucien losing his mind slowly as the judge takes over. Can he regain it back? Or is the entire place turning into a  graveyard that will never recover? Or is it possible that Lucien is actually planning a bit of treachery?

The story is great. It’s vibrant and it’s made it’s mark on me. Kudos to Spurrier on this. And kudos to Evely on art. She’s doing a top notch job. This is getting good. Let’s see where it goes.