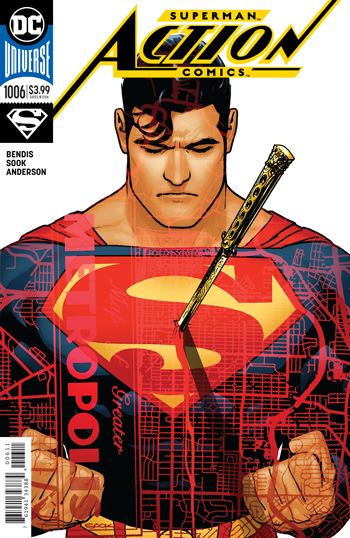 I would have liked the story by Bendis either way, but his art really does elevate it to another level. Having him on this title is truly a stroke of genius and I really like his contribution to the Superman mythos. It’s really great to see.

She has her eye on someone close to Superman and it’s pretty damn intense! We start off with a chaotic scene and then we see Clark listening for trouble. He is literally listening to find the Red Cloud or to at least be pointed in the right direction.

But that may prove to be more difficult than he thinks it is.

Clark then makes his way to the Daily Planet. He starts scouting around for clues. He even asks Jimmy Olsen if he knows anything about the Red Cloud. He starts scanning for some sort of sign until he finds something. And then at that point, it’s literally Superman being off to the rescue.

Bendis peppers his script with little clues that really pay off. His past writing in crime fiction really benefits him well here.

There is enough to draw the reader in and to also keep them guessing. He also knocks it out of the park in the dialogue department as well.

So, Superman eventually finds the Red Cloud. They have a confrontation and it’s beautifully handled. That leads to a surprise moment at the end of the book that I really enjoyed. It also should open up many great story possibilities.

This was a great chapter of this continuing comic book. There is a good and solid long term goal on this comic and it shows. It’s a great time to be reading Superman and this reminds us all why that is the case. Good stuff!