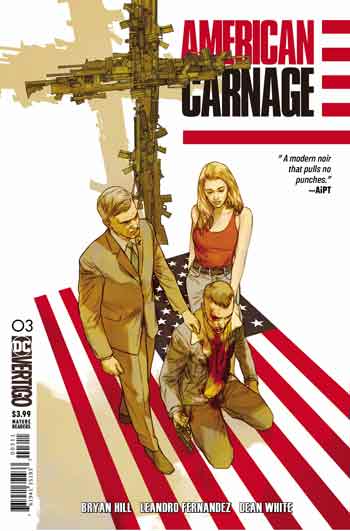 Man , I love this comic book.

Bryan Hill has gone to places I never expected and I commend him for his writing on this. It both brave and topical. He’s always been a strong writer, but in this series he’s on a whole other level.

It’s an incredible thing to witness.

We open up on an adrenaline fueled scene.

FBI Agent Richard Wright is undercover with a white nationalist gang. They are ready to kill an innocent black man and want Wright to jump in. He goes against them. There is a verbal argument.

Then, the whole thing turns into a bloody massacre of epic proportions.

This scene is incredibly drawn by Leandro Fernandez. He shows how quickly violence can erupt and the bloody consequences of it. The escalation is important and it’s something that many artists can’t do very well. He manages to do it masterfully.

From there, we get a flashback to the FBI office. We see Richard Wright filling in his boss what is going on. It seems it’s just a a simple scene but writer Hill uses it to talk about identity issues and race. It’s not a scene that beats you over the head either. Instead, it’s a thoughtfully done scene with a worthwhile discussion.

We flash forward to the massacre. Richard calls Jennifer to help him out. Jennifer sends over a man in a mask who is very mysterious and scary. That leads to a hell of an ending where Richard goes to Jennifer and realizes that his cover may be blown. The last image is one that is terrifying and made me want the next issue immediately!

This story is something else. On the surface it is an action and suspense comic. But it goes much, much deeper than that. These two creators have given us a comic book that is smart and relevant to today’s world. Bryan Hill and Leandro Fernandez are to be commended for their work on this engrossing title.