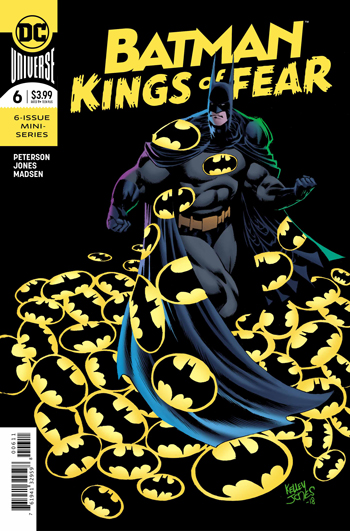 This series has been a delightful discovery issue after issue.

Originally, I had thought this was going to be a quaint, if somewhat nostalgic series after reading that first issue.

It had classic Batman artist Kelley Jones after all, and he’s done solid work throughout the years. This however, is beyond anything he’s ever done. The power of the artwork here is unimaginable.

When you combine that with a different type of story, you’ve got something truly wonderfully indeed.

We start off this last chapter with a Dark Knight at the end of his rope.

He’s staring down the Scarecrow and ready to knock his block off. Yet, the Scarecrow notices something. It seems that over the course of the last few issues, Batman has had a sort of mental breakthrough. Batman has seen what Gotham would have been like without him in it and it’s now ingrained into his brain. The two have a conversation about it that is appropriately psychological.

At this point, Batman takes the Scarecrow down. It’s a quick fight.  And then Commissioner Gordon and the police show up. Things seem to have been resolved early in this issue.

But then there are some twists and turns and a surprise reveal of who the Scarecrow’s accomplice is.

Peterson does a great job scripting this book. It’s smart without ever talking down to the audience. The writing also kept me on my toes right until the end. He doesn’t always rely on normal types of plots to tell his story and that’s incredibly refreshing. He also is confident enough to let the story and the characters breathe.

Batman hauls the Scarecrow back to Arkham Asylum. He has a nicely written talk with one of the doctors there. Then he heads back to the Batcave. He reveals to Alfred that the Scarecrow really got to him this time. And that leads to a really well handled ending.

The ending is especially wonderful because Peterson and Jones take Batman out of the toy box and they shake him around. Then, they put him back having been through the wringer and give us that one hero image to end with. Yet, the effects of the story are real and it’s represented in that image very well. It’s really some powerful stuff. This story needs to be in my collection as a hardcover. It’s really that good and I commend the creative team for taking a chance and really just going for it. It paid off in an imaginative and creative way.