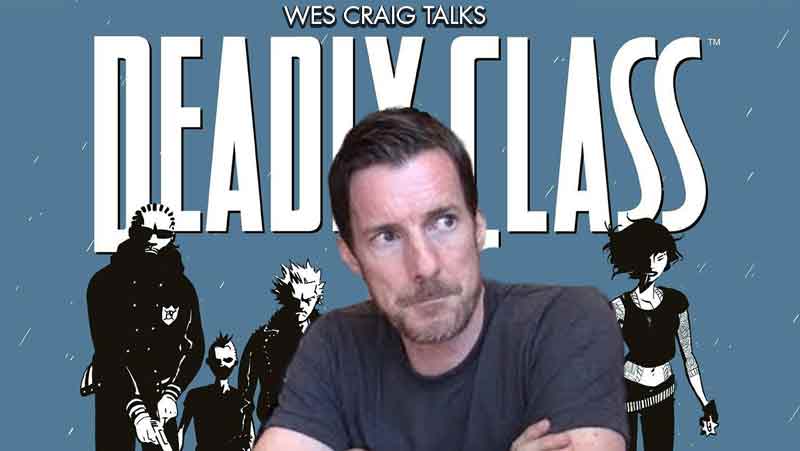 This week, the Syfy Channel premiered the first episode of Deadly Class, based upon the comic book series by Rick Remender and Wes Craig.  Both the comic and the television series are set at Kings Dominion High School for the Deadly Arts, the most brutal high school on Earth, where the world’s top crime families send the next generation of assassins to be trained.

I had the opportunity to chat with co-creator and artist Wes Craig at the 2018 New York Comic Con about the comic, it’s genesis and where it’s headed.  Special thanks to Chris Ferreira for helping record the interview.

FOG!:  What was the impetus behind the creation of this book?

Wes Craig: Well, I think what started if off was that Rick (Remender) had the idea of two things that he wanted to do: He wanted to do a story about an assassin academy and a story about growing up in the 1980’s and he wanted to mesh those two ideas together and it eventually became what is Deadly Class.

He started to look for an artist to work with on it. I had done a little Batman thing with Lee Loughridge as the colorist. Lee and Rick are friends. It was a story of a young Bruce Wayne in Asia. He saw that. And I always wanted to work with Lee. I’ve always loved how Lee has this very simple, minimal color palette. I was always asking Marvel and DC if I could work with Lee. And it was just kind of this lucky break where Rick was over at Lee’s place. And Lee happened to be working on that very comic. And Rick was like “who’s this guy?” Rick then contacted me and it was an easy sell! At least to me. I was already a fan of Rick’s work. I was a fan of Fear Agent and Strange Girl. I liked The End League. I think he was working on X-Force still. Anyway, he had a lot of good ideas. This Deadly Class idea had a lot of elements I liked with the punk stuff. We came from different places but had very similar backgrounds.

It must be fun to get into the comic a lot of the stuff you both love. Are you a child of the 80s?

Rick and I have a few years age difference between us. My teenage years were a bit more on the 90s and his were in the 80s. I was around for the grunge scene and Nirvana changed my life and for Rick it was more like Bad Religion. I had to take myself back to the stuff that Rick was listening to like Black Flag and the Misfits and all of those 80s things. We compared notes. And we have a very similar take on things. And like I said he was a fan, so I said whatever he wants to do I’m in. (Laughter)I called him and said “whatever you want to do Rick, I’m down for.”

So you just got out number 35 recently? It had a big turn of events in it and ended a major story arc. When is Number 36 on its way?

I just finished number 37 with number 36 coming out in early December.

How long does it take you to complete each issue?

It usually takes me about five weeks. We do go on break, and we do take some pretty big breaks these days between paperbacks. None of us like it. We would like the next issue to come out as fast as possible. But you know, if they come out every month and it takes me five weeks, that schedule catches up with me. While we are on break though? I’m still working on it. We’re still working on the comic always.

But Rick is helping to make this tv show come into being. It’s taking a lot of his time and effort. It’s like assembling an army when you make a television show! (laughter) The comic book? It’s like you and two or three or your buddies can make it. But to make a tv show, it’s a completely different story. Rick’s working hard too to make sure the television scripts are getting done as well as the comic book scripts.

Have you seen the tv pilot? I saw it in San Diego and loved it.

Oh, yeah. They did a great job with it. I’m not directly involved with the making of the show. I do have a few things here and there that I did. Just to give it a bit of the flavor of the comic book. 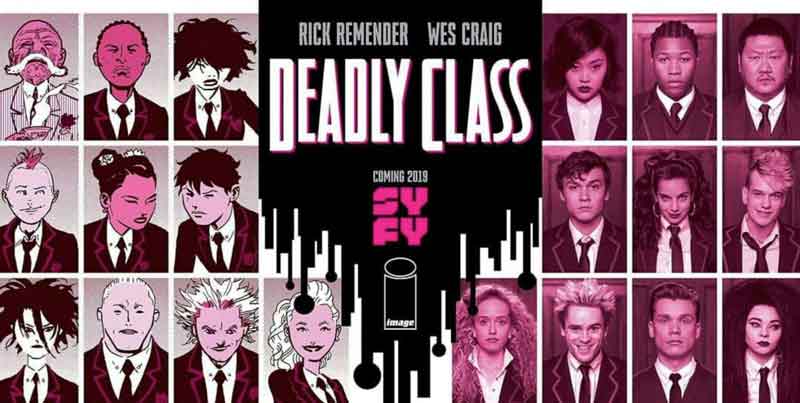 Awesome. So you have the big book coming out, Volume Two, collecting Issues #17-31. How does that feel seeing your work collected in that format and in that size for the art? I have the first one and it’s amazing.

Yeah, it’s really cool to have that. I mean, there’s a lot of work that goes into it. I wanted the single trade paperbacks to be free of extras. But with the hardcovers, I want the extras. And it’s great, pulling the art up to that size. I feel bad for people to bring to the conventions for us to sign because they weigh a ton (laughter).

I went to a Seattle convention with Rick one year and he brought a bunch of his hardcovers. He has a whole bunch. He has a lot of his older work in hardcovers too. And he was lugging this suitcase around with him (demonstrates Rick Remender lugging around a suitcase in pain) and he was like “never again!” (Laughter) “Why do I bring all of these hardcovers with me?”

Yeah I have it in my house and it’s like a tomb. If you drop it you can break your foot.

Yeah, god help anybody who breaks into your house, you can use it as a weapon! (Laughter). 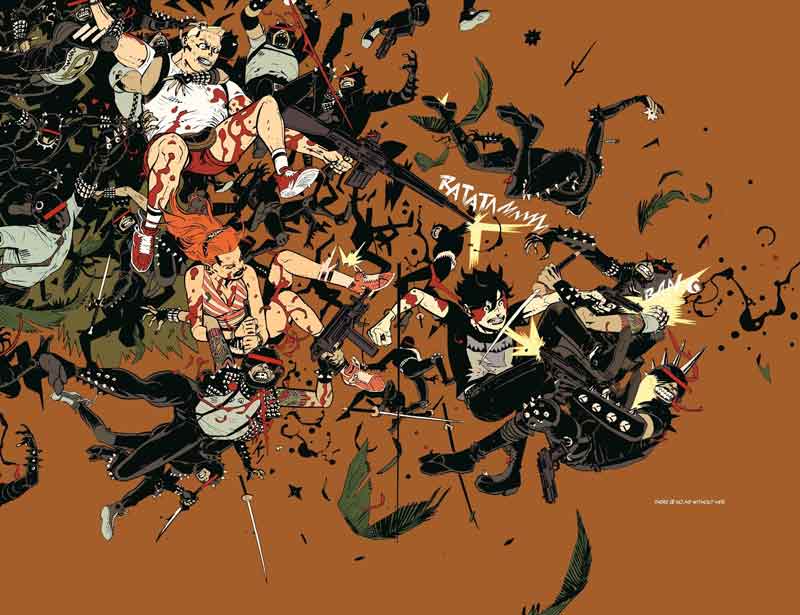 Is there an ending in mind? You don’t have to tell me what the ending is (laughter) but do you know where this might be headed at the end of the day?

We do. But it’s loose. We focus more on pivot points in this story. What I’m about to say may be a spoiler if you haven’t read the series yet but…a lot of the cast members, a lot of the students in this book well, they die. And then there’s new cast members. Upcoming there’s going to be a major shift. And then we are going to see where we land from there. We are then going to see how much story potential we possibly have with this new setup.

This will be in the next trade paperback or maybe the next trade paperback and a half. And then I think we will know how much story there is left to tell. But Rick is keeping it loose. That’s one of the things that I enjoy about his writing. He keeps it very alive throughout the process. It’s not like he wrote the whole thing and it was five years ago and nothing is ever going to change. He keeps it going. I do the drawings. He give me me the breakdown of the panels and basic dialogue. But he does the final dialogue when he gets the artwork back. So right up to the point where we print it, it’s always changing. It’s never frozen. I’m inspired by the way Rick works.

And that must affect your own writing, too.

Absolutely. You find new things that way. You’re always evolving. As a writer, you can write it out. But if you get a better idea, don’t be afraid to change it. Just because Rick might have spent all this time working on an idea, he’s not afraid to scrap it for a better one. He will rewrite the entire script if he finds that better idea. And that’s rare and I’m fortunate for that. 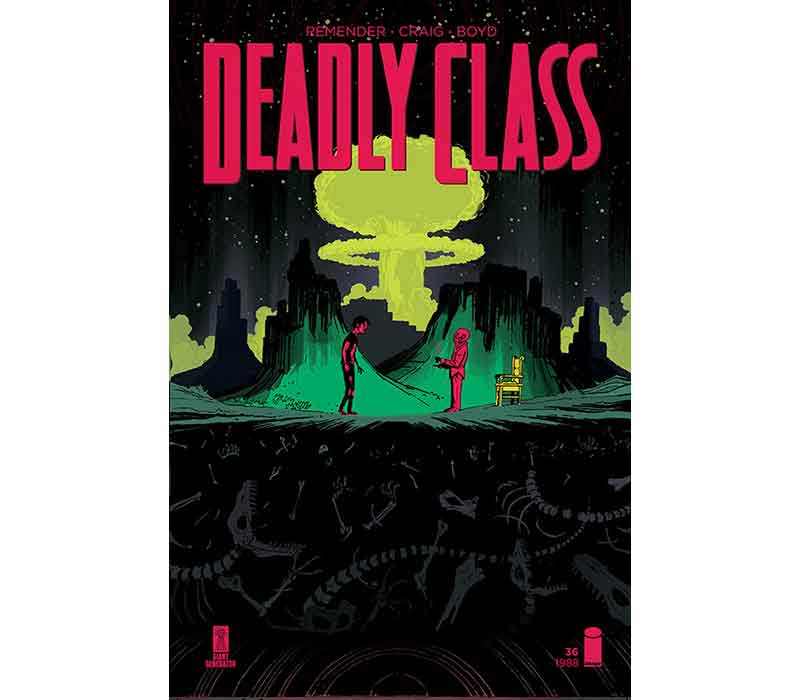 Deadly Class #36 is available now in comic book stores and via digital
All New Episodes of Deadly Class air Wednesdays at 10/9c on Syfy.