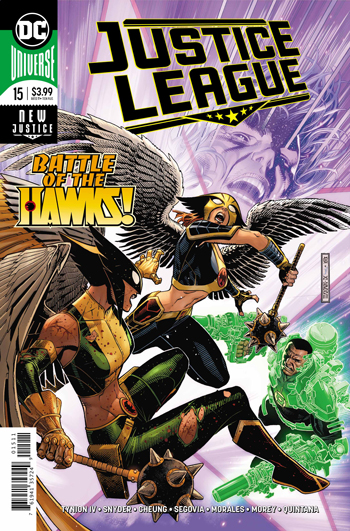 “Thanagar Prime protects a secret that stretches the history of the multiverse.
We have the right to defend it with extreme prejudice.”

Even though, apparently, all the greatest civilizations of the cosmos other than Earth are in on it.

But it is a cool concept.

And I’m not going to razz on it much, because pretty clearly it’s in keeping with the enjoyably inevitable conclusion of that old, narrative line we’ve all heard before.

The one that is forever emphasizing ‘the unconscionable and infuriating danger of that single, solitary, backwater planet – whose inhabitants and super-powered community have been more of a threat to the sanctity of existence itself, than any other populace in the known multiverse!’

Except, of course, that it’s true. Over and over again. Forever rewriting the cosmic order of things. Almost like we’re the only real center of attention.

Really, it’s a wonder no one’s blown us entirely out of the galaxy before now.

But that, it seems, may be exactly the point.

In fact, if some of what is revealed in this month’s issue is any indication, it may be the primary justification of Thanagar Prime. Unless, instead, it’s the very survival of Thanagar’s history and it’s pre-eminence place in the universe. Unless, actually, those two things are one and the same.

There’s still some mystery to reveal. Still some of the story to tell. But now our heroes, both near and far, have a name to go with their current, latest and greatest, crisis.

And now finally, her story can be told.

Get ready for a tale that’s a final plank in the bridge, as our storytellers get ready to shift everything up an octave.

But first Martian Manhunter, Hawkgirl, and Green Lantern John Stewart need to penetrate to the depths of Thanagar Prime, to the very core of the mysteries it protects, to find the Martian Keep and uncover the dangerous secret at the heart of Empress Shayera’s righteous cause.

Everyone keeps saying it’s a secret that should never be uncovered. That whether for our own good, or the good of the multiverse, it’s better that it stays buried, locked tightly away behind the host of interstellar weapons designed, apparently, to be turned on Earth itself.

For the day when such a need should arise.

For the day when such a crisis should finally arrive.

A crisis with earth at the center of it. One the rest of the universe is girding themselves to prevent. Just like the one we seem to be right in the midst of now.

Next Issue: He’s told us not to blow it/’Cause he knows it’s all worthwhile.