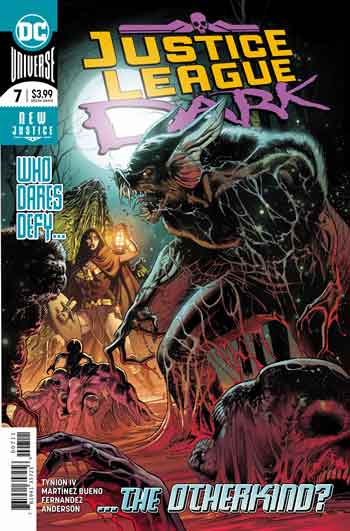 “No… no. This isn’t right. This isn’t a story I know. How could it be here, among my files? Why is it written like this?”

Well, well. The walls really are coming down.

Our story this month, turns its eyes toward a question we have needed answered for a little while now: just what have the Otherkind been getting up to lately?

The answer to that question, is quite a tale as it turns out.

Or, many tales – much to the chagrin of our league of defenders – and in particular to Dr. Kirk Langstrom, aka the macabre and mawkish Man-Bat, who has taken it upon himself it seems, to chronicle a growing string of the team’s encounters with the deadly, dangerous, and dreadful Otherkind.

Perhaps not the smartest idea there, Kirk.

The stories in question, are an opportunity for author James Tynion to take a turn for the nightmarish weird, as well as a chance for us to get a better feel for the encroaching horror of the Otherkind into our world.

Not only does that allow for our team to cross paths with other corners of the magical dark of the DCU, but at the same time it provides us with a sober appreciation of just how severe of a threat the Otherkind poses, through a series of rather satisfyingly disturbing encounters, none of which end well at all.

It’s a wonder the members of our own team have managed to emerge from them all unscathed themselves.

I guess forewarned, is fore-armed. So far, anyway.

But there’s another, far more, interesting thing at play in this issue. Because for the first time in this series – though not, notably, in recent DCU continuity – we’re treated to a striking break in the fourth wall itself.

It’s a twist that seems to be in keeping with something new that has been sparking across the DCU itself lately, and it is an especially apropos rendition of the idea, for a book of this genre.

Orson Welles, eat your heart out.

Because what happens when the enemy finds purchase into your world through the power of stories themselves, creating mind-worms of dread and terror that eat away at the soul, and twist the walls of reality from the very inside out?

It’s a good thing two can play at that game…

Next: A Call to Order