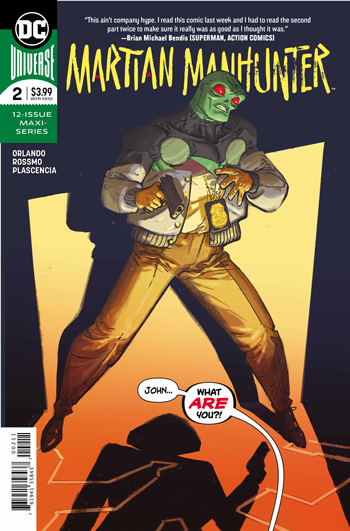 Last we left our favorite Martian, J’onn J’onzz was discorporating in the flaming wreckage of a car crash, his partner Diane beside him witnessing his transformation with horror.

Turns out though, that Diane Meade is tough as nails.

Doing credit to the term hard-boiled, she bulldozes through her shock and saves an otherwise useless J’onn J’onzz from the ravages of the fire.

She’s not about to let this alien monstrosity, who was her partner only minutes before, die.

Not without a reckoning.

In the meantime however, J’onn is unable to pull free from his own shock, and the trauma is a perfect opportunity for us to flashback to more delightful reminiscences of his home planet – and an ancient, once proud culture, now gone. Lost to the ashes of time, and red, red dust.

And once again, it’s marvelous.

More fascinating details about J’onn’s history and way of life fill in, with more shapeshifting, more weird alien technologies, more domestic life, more rites of passage, even more alien sex, and more about J’onn’s career as a Manhunter. Along the way we get a few key pieces of history ranging from why the human form comes so naturally to our Martian brethren, to the breadth of danger that fire truly represents to the race, and the first glimmers of the catastrophe destined to lay them low.

It’s hard to say enough about how good this book is, but I’ll start by saying that Steve Orlando and Riley Rossmo are a dream team for the job.

Rossmo’s heavily stylized art is nuanced and detailed, with a wonderful eye for perspective and layout. Ivan Plascencia contributes another level of richness with fantastic colors to convey a wonderland of Martian landscape – and clearly delineate it from the new, relatively drab alien landscape J’onn has since learned to make his own.

Orlando delivers a truly impressive, rich, well-thought out depiction of an entire alien culture, delivered in snapshots at once familiar and bizarre. It’s as delightful to recognize the depths of love that J’onn J’onzz has for his wife M’yri’ah and adorable globlet daughter Floret, as it is to see the origination of a species from actual Platonic ideals.

It’s a book worthy of the mantle Martian Manhunter, and I’m pleased as punch DC’s got the right people for the production.

But first, J’onn has a decision to make. And unlike that classic, final scene in Superman 2, I don’t think he’s going in for a kiss…

Next issue: Time for J’onn’z and Meade to have a heart to heart. Ew.