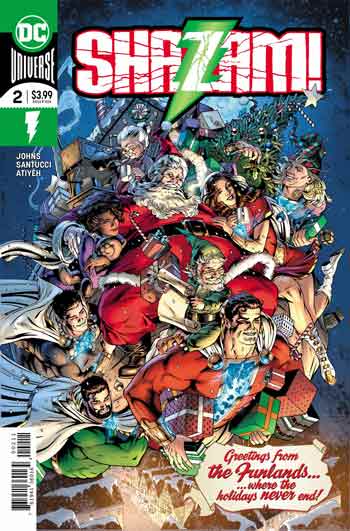 The first issue of this new Shazam title was a nice little jolt in the arm. I’ve always loved Captain Marvel, but he’s been kind of abandoned over at DC the last few years. When he does show up, whoever is writing him could never really get a handle on him too well.

Writer Geoff Johns does better than most. He’s got a decent take on Billy Batson and his alter ego.

This  issue begins in the house of Billy’s adoptive parents. There is a man who showed up at the end of the  last issue who claims to be Billy’s father. His adoptive parents talk and ask a lot of questions. Is this guy on the level?

If he’s Billy’s father, then where is the mother? They go to look in Billy’s room and he is gone with the other foster kids leaving the foster parents bewildered.

Geoff Johns starts his story off on a strong note. From there, we see Billy and gang at the Rock of Eternity. They head out and board the infamous train. Billy has discovered a big secret from the Rock that sends his life in a tailspin. He takes his family on a fact finding mission to determine what may or may not be the truth!

The story has some great forward momentum at this point of complicating things in another scene is that Doctor Sivana and Worm make an appearance. They have a scheme that they are hatching. Does it have anything to do with the other two plots going on in this issue? It’s pretty safe to say that that might indeed be the case! It’s great to see the villainous duo again and they are handled quite well.

Meanwhile, Billy and the family head towards a mystical amusement park. There they are looking for the missing seventh member of their family. By the end of the issue, they find him. His name happens to be King Kid. And judging by his appearance at the end, he looks like he’s going to be a wacky character indeed.

It’s a pretty decent issue overall. Johns does a capable job in writing this. I do have few minor complaints, however. Billy and his family never turn into their superhero identities here. While the story is fun, it’s very noticeable. And the art is by Marco Santucci. He’s a fine enough artist, but Dale Eaglesham was slated for this series and he’s not here after one issue. Never a good sign.

All and all though, I’m intrigued enough to see where it goes. Johns is always worth following so I’m going to stick with it a bit. Hopefully, this series takes off. It certainly has the potential to.