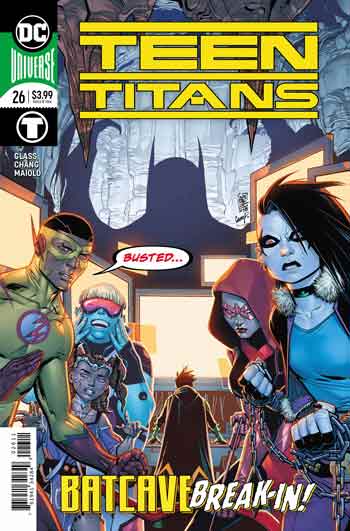 “Easy for you to say Red Arrow. You trust Robin.”

“I don’t trust anyone, but he gets the job done. Sometimes that’s more important than trust.”

Oh yes, Red Arrow? So sure of ourselves are we?

Something tells me we’ll be putting that philosophy to the test pretty soon.

But first Damian Wayne has a score to settle with his brother Jason Todd, and to do that he needs something from Wayne Manor.

Why? Well it’s all a distraction apparently. Yet another signal about the possible inner workings of author Adam Glass’ mind. Seems even the secrets have secrets in this group. Goodness knows Robin has a few doozies already going.

And it appears he’s not the only one with an agenda.

Thankfully, Mr. Glass doesn’t spin out the suspense endlessly, instead choosing to give us helpful, (though possibly distracting), pieces of the puzzle pretty consistently as we go. With lots of entertainment along the way.

I mean, who doesn’t want to infiltrate the Batcave? Uh.. pretty much anyone? Yet here the team is, following Damian’s lead into one of the dumbest things you could ever imagine doing.

Speaking of which, what exactly is going on with Djinn? Because if trust isn’t exactly an option yet, just what job is she intent on getting done? Because Robin maybe just made that a whole lot easier.

No answers yet, not this month. Something tells me though, that’s not going to last very long.

But wait, hold on – even if we do get through the landmines of the next two issues, it’s worth noting now, that the team is apparently on a fast-moving collision course with one of the craziest headcases in the DCU. Someone who’s had a long, and less than trustworthy relationship with the Titans for a good long while now.

I mean, just imagine the sort of drama this team is in for when they find themselves squaring off against, yep, you guessed it – Deathstroke!

Oh yes. The mind positively reels with the possibilities.

Seriously, if you thought Adam Glass had a penchant for secrets and plotline twists before now, just imagine when he teams up with Christopher Priest. Unless, of course, that’s already well underway.

Unless they’ve been the real co-conspirators here, behind the curtains, all along.

Hey, sounds good to me, fellas. I say, bring it on.

Whatever gets the job done, right?

Next Issue: Check out Teen Titans Annual #1 when things come to a head between two sons of Batman… and some of the walls start coming down.