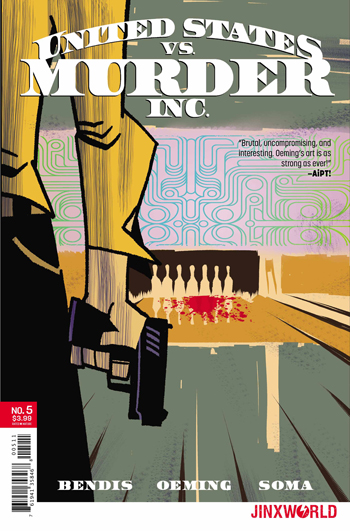 Brian Michael Bendis has been on fire! All of his books that he started on for DC have been taking off! This one is one of the more underrated ones on his roster but it is still damn good.

Bendis also works well with his collaborators and here him and artist Michael Avon Oeming just knock it out of the park.

The issue opens in a place called Sugar Grove, Pennsylvania in a bowling alley. Valentine sits and waits. Agent Bell and Agent Glass come in. It appears Valentine has called them to talk. What purpose does he have? Do they have any tricks up their sleeve? And why won’t the Agents put on some shoes and just bowl? All of these questions and more are answered right here in these pages!

The agents want to know who killed President Sanchez. They think it might be Valentine. It isn’t. But he says he knows who did do it. How does he know? Simple. He was actually there.

It’s moments like these that really define Bendis as a writer. He takes this really low key and dialogue heavy scene and turns it into something unbelievable. It eventually goes bad. The Agents and Valentine come up against each other after a reveal. Violence erupts. And there are a few deaths even for good measure.

This leads right up to the horrifying last panel. I don’t want to say anything else except that Oeming nails the image and Bendis nails the dialogue. It’s the penultimate issue of this book and I’m as excited as could be. The end of this issue is pure adrenaline and makes you want that next issue as soon as possible.