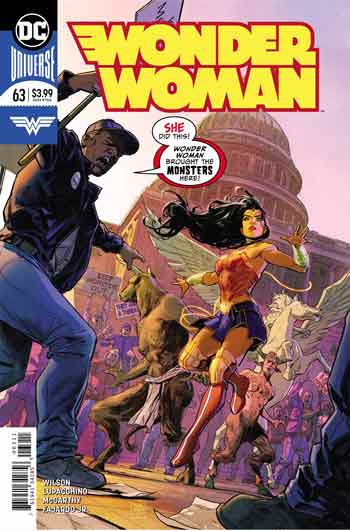 A Griffin and a Pegasus walk into the Border Patrol office.

Sorry, that’s really what’s happening here in Wonder Woman #63, not a setup for a joke!

G. Willow Wilson brings her savvy social commentary to her latest issue of Wonder Woman to address the global immigration issue and subtly asks the question about what happens to mystical creatures from Themyscira show up unannounced to a country that isn’t prepared to handle it.

We’ve been following Eirene and company through their capture of Steve Trevor, now we fall witness to the creatures trying to assimilate and it is not going well to say the least.

From a culinary adventure where Damon plays the role of Ron Swanson, demanding piles of meat to the aforementioned Border Patrol office kerfuffle that ends up with our new friends smashing through plate glass to escape the tyranny of red tape paperwork and no job aspects, Wonder Woman herself only appears in a few pages of her book this month.

Wilson is developing the characters here and making handshake introductions from her friend Ferdinand, master chef of the Themysciran Embassy, to fellow Minotaur Eirene. Perhaps Ferdinand and other mentors can help these beasts fit in to society a little easier.

Veronica Cale, Greg Rucka and Drew Johnson’s super villain and foil for Diana, makes an appearance later in the book, and with the power of a JSA foe at her finger tips, we have a feeling something is afoot.

With the threat of Ares resolved for now, the next adventure is kicking off to kind of a slow start but like the best of the best comics stories, the last page has a reveal that makes you want more. Wilson is great at this last page reveal, I would go so far as to say it is their greatest strength as a writer. The backbone of what might really be going on as Gods are exiled from Mt. Olympus is sprinkled throughout the book and will surely result in some major revelations.

Wonder Woman faces off against tycoon Veronica Cale next issue, but will it be as Diana Prince or as her superhero ego?

Though I may suggest you read Wilson’s run from the beginning, this issue on the new issue is also a great place to start if you are thinking of checking out Wonder Woman, this will go down as one of the legendary arcs for DC fans.