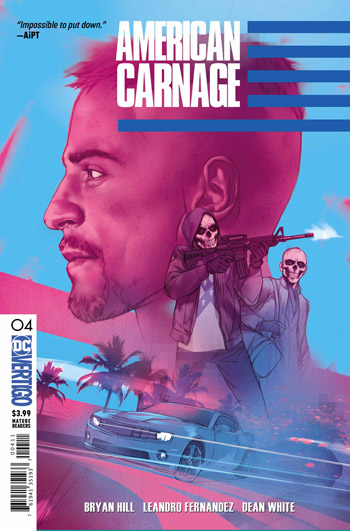 This is the book that I’m going to always associate with writer Bryan Hill.

He’s done an amazing and smart job creating this and giving us an amazing story. I can not believe the twists and turns this has taken and the anticipation between issues in killing me. This is something great indeed.

The issue opens with the police removing the remains of a burnt cross. One of the police officers asks if this is the year 1955. There is an interview that follows between a detective and Wynn Morgan’s sister, Jennifer.

Wynn Morgan is the villain of the piece and he’s a wealthy white supremacist. The scene is tense and the plot really start to pick up even more here.

From there we see a tender scene between our lead character Richard Wright (an undercover agent) and a little girl who is Jennifer’s daughter . The little girl speaks sign language so we get to see a wonderfully illustrated scene where they talk about the world.

The little girl asks why people would want to hurt others. Richard answers her back with sign language and it’s actually very sweet. Then he tells her a fantasy story and it’s beautifully done as well. This gives the book a bit of heart.

From there we get a dramatic car ride. Richard, Jennifer and the little girl are driving back to where Wynn is. They have a conversation. In the middle of it, Jennifer orders that the two of them leave the car. She then drives off and leaves them on the side of the road.

There is a war brewing between the FBI and the white supremacy group and it’s starting to get tense. There is a lot of build up. There is a lot of people spouting forth their philosophies. And it’s all magnificently handled by Hill. It’s a nice balance of tension of great dialogue throughout.

The issue concludes with a mysterious death. It’s a bit of a surprise. It got my mind racing though. What’s better than that as a reader? This is a wonderfully written book where the suspense never lets up. It’s topical without being preachy and that’s one mighty feat indeed.