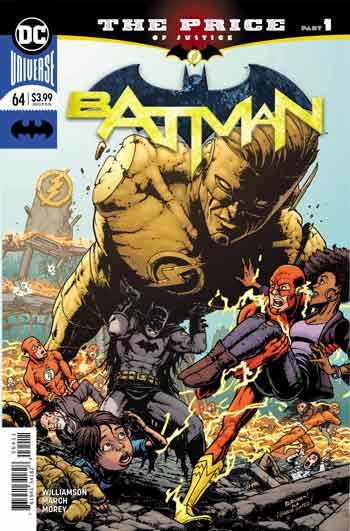 I was sad when I heard that Tom King was taking a small break off this title.

He will be back, but it’s a very weird place to place a break like this. At least they got Joshua Williamson to write the issues in the interim and he’s usually pretty solid.

And then I saw that Guillem March is on the art duties. He’s one of the more underrated artists out there.

From there, my hopes were raised a little bit.

So how did this creative team fare?

Well, not too bad. The opening scene has some powerful imagery of Batman standing over the dead body of Wally West.

It looks like he’s actually going to be performing the autopsy of the fallen hero.

It’s a powerful page indeed that draws you right into the story. March does an absolutely amazing job setting the mood right up and it’s truly a chilling scene.

From there, the story cuts to the Justice League fighting against Amazo in an all out brawl. While this is happening , we get to see some nice interplay between the members of the League. Williamson does a solid job of nailing each of the characters in the League’s personalities and making them each unique and interesting.

This is a nice tie in to the Heroes in Crisis storyline. I love that we see that the Flash and Batman were going to team up to figure out the mystery about what is going on in Sanctuary.

Williamson writes a nice and thought out tale that has a good set up and pay off. I love the way he handled a difficult story like this.

We then see a major attack over at The Flash Museum. This scene is so magnificently handled especially in terms of the artwork. You start to ask yourself why March isn’t a bigger name in comics. And maybe he will be after this. I hope so, as he handles all of the characters here extremely well and makes them all dynamic.

The end of the book reintroduces two characters from the beginning of King’s run. It’s super cool to see them handled this way. While I hate an interruption of a storyline in progress with fill ins, at least this is of a good quality. I’m happy it isn’t just a throwaway and it seems they did something really cool instead.