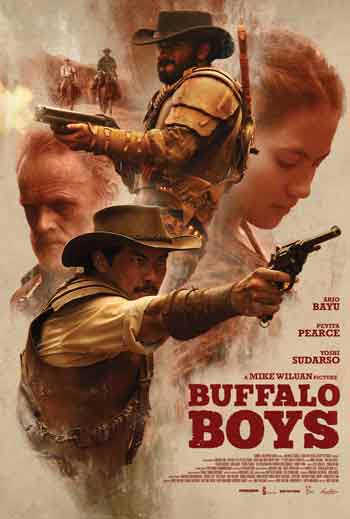 Writer director Mike Wiluan checks in with a strong debut. Buffalo Boys tells the story of two Indonesian brothers, sons of a sultan, who were forced to flee Java to the U.S. as babies in the care of their uncle.

They return years later to find the land under the dictatorial rule of the imperialist Dutch and must fight to reclaim their birthright.

The brothers, Jamar and Suwo played by Ario Bayo and Yoshi Sudarso, are taken through a tough trial as Wiluan does nothing to sugar coat the brutality of the imperialist Dutch.

Bayo and Sudarso also paint a reality that can’t be ignored.

Whitewashing needs to come to an end in Hollywood, period. They are both handsome, switch easily between Javanese and perfect English, and have real acting skills.

Either one of them could have starred in a variety of whitewashed Hollywood productions easily and they would be mega-stars right now. The mere suggestion that Asian actors can’t carry off certain roles is indicative of an implicit bias that needs to be rooted out of the casting process. The entire cast is very solid, including some purposefully over the top performances in support of the film’s homage to the spaghetti western.

The Spaghetti Western vibe is really well done. You get some jump cuts, rapid pans and rapid zooms to really punctuate the feel and the brother’s costumes are western U.S. while the imperialist Dutch look a good bit like Confederate soldiers. As I mentioned earlier you get some purposefully over the top, foppish at times, performances to really amplify the themes that Wiluan was going for. The main bad guy, Van Trach, played by Reinout Bussemaker is brutal and cruel and there isn’t a moment when we aren’t rooting against him.

Wiluan really takes great pains to show the horrifying conditions the Dutch imposed in Indonesia. The Dutch East India Company was entrenched above the nobility there for close to 200 years, essentially enslaving the Javanese until the imperialistic overlords changed in the late 1700’s. At one point Van Trach gives a strong speech about how the people should be thankful to live under his tyranny and the writing and execution by Bussemaker are truly chilling.

Social commentary aside, this is a super fun movie to watch.

There is great action, solid writing and excellent performances. There seems to be a lot of care taken in telling an authentic story in an interesting way. I am impressed by the technical side of the film as well. The shot choices and editing are excellent and the cinematography is really well done. One of the things I run into regularly watching lower budget indie films is there are usually lighting issues, but that isn’t the case here. The shots are well lit and the only times I found myself jumping back to re-watch portions is when I missed some of the sub-titles and didn’t want miss the intention of the dialogue.

There are certain areas of the story that could have seen more development. The boys’ uncle is a pretty compelling character, but I feel like we don’t learn enough about him during the story. I would have liked to see a little more action. I understand the cost of action sequences can be really daunting. There is really solid action, but I would have enjoyed seeing a bit more. I wouldn’t be surprised to find they cut a couple of sequences so they wouldn’t have to skimp on the big fights. If that’s the case, Wiluan is forgiven. The movie works.

This is a fun movie with a solid story. If you like American Western inspired stories you will really like this. It’s well made, well written, well acted and well paced. You can’t really ask much more.

Buffalo Boys in now playing in limited release and is available On Demand.