Award-winning screenwriter Gary Whitta (Rogue One: A Star Wars Story, The Book Of Eli) has teamed with celebrated artist Darick Robertson(Transmetropolitan, Happy!, The Boys) for a new take on a literary classic—with a futuristic twist. Oliver re-imagines Charles Dickens’ most famous orphan as a post-apocalyptic superhero fighting to liberate a war-ravaged England while searching for the truth about his own mysterious origins.

Gary and Darick took some time to discuss the book, it’s genesis and the possibility of a Dickensian Comics Universe.

FOG!: What was the origin of Oliver as a screenplay and at what point did you decide to develop it as a comic?

Gary Whitta: Oliver was actually the screenplay that broke me into Hollywood, it’s the piece of material that got me a manager and an agent. Obviously the film never got made but as my screenwriting career got going the story always stayed with me, kind of pestering me to find a way to get it told. I’ve always been a big comics fan and in going back over the story it occurred to me that it might work just as well in the sequential form.

So I started reworking the script and breaking it down into an issue-by-issue episodic format, and as I did that it really started to come to life in its new form. So maybe it was always meant to be a comic, it just took kind of the long way round to becoming one.

FOG!: How did you get involved in the project?

Darick Robertson: Gary first reached out to me when I was still living in New York back in 2002. He had the screenplay and the idea to make it into a comic. I wasn’t in a position to take it on then, as I was still working monthly on Transmetropolitan and had just taken on regular art duties for Wolverine at Marvel.

We became friends and stayed in touch. After I’d read it, I’d never gotten it out of my mind, so back in 2004 we agreed to co-create the comic and adapt Gary’s screenplay together. Being an indie book, I’ve had to take on other work while creating this, in order to protect our rights and vision, so during these years I’ve had some successful runs on mainstream titles as well as co-creating The Boys and Happy! while working to create Oliver to launch the book at the right time with the right publisher. Image is the perfect home for it. I’m glad we exercised the patience and timing that it took to get us here. 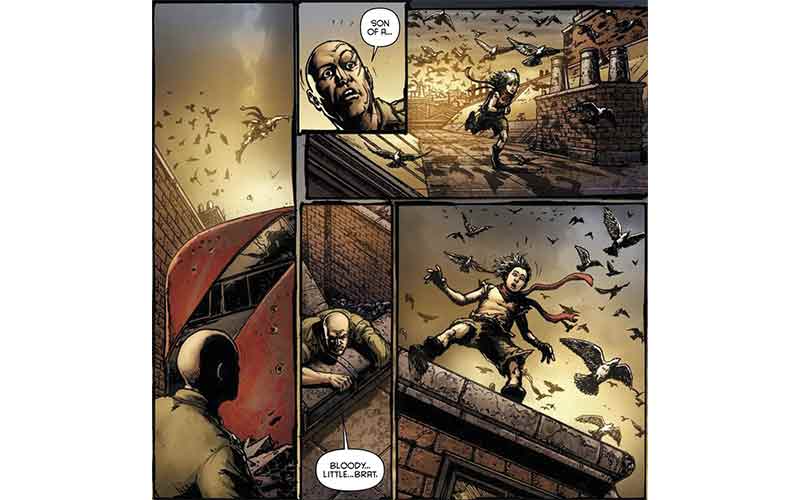 FOG!: One of the things I really enjoyed is that it’s not just Oliver Twist in a different setting, but rather inspired by Dickens’ novel. What elements from the novel did you feel were essential to bring the story to life?

Gary Whitta: Thematically I think the two have a lot in common and that’s what I really focused on rather than plot. The Oliver comic definitely has themes and characters and settings that you’ll recognize from the original Dickens but beyond that it very much does its own thing. But it was really important to me that the central theme of social injustice remain intact, that’s kind of what drives the whole thing.

FOG!: You designed a future world in Transmetropolitan and have created a very different alternative future in Oliver. How do you approach visualizing a world and what challenges are involved in doing so.

Darick Robertson: I wanted to bring the cinematic atmosphere Gary intended for the story into being, and at the same time create a comic that I hope readers will enjoy, making an environment you might feel you could explore. Whatever Oliver may become in other media, I always want to have a good comic at its roots.

I wanted to create a world that is recognizable as London (as I did extensive research to capture London as best I could) and at the same time take the reader away from reality to entertain the idea of this little kid with powers, coming to be, in a hostile world full of threat and danger. 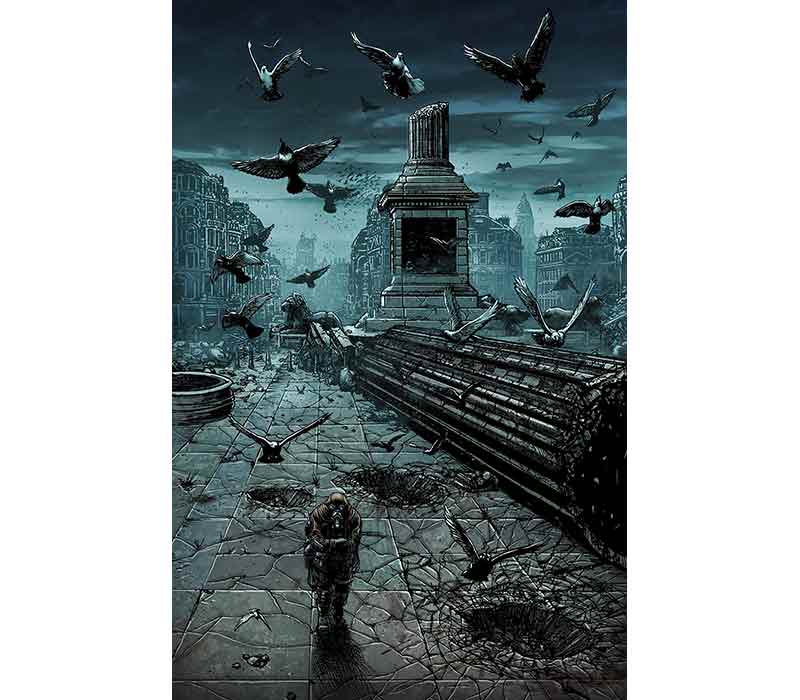 FOG!: This started as an early spec script at the beginning of your career and now, fifteen years later, it’s being produced as a comic. What kept you passionate about the project and do you think that ultimately, the story is best told in the comic medium?

Gary Whitta: I’ve just always had a really strong affinity for this particular story. Dickens himself said “A boy’s story is the best that is ever told” and that’s how I think Oliver works best, as the story of a young person coming of age and trying to figure out his place in the world, how he can somehow find a way to belong in a world that has no place for him.

And the comics medium turned out to be a great home for it because the story is structured with so many reveals and surprises that we’re able to end almost every issue on some kind of cliffhanger or rug-pulling moment that hopefully will have people eagerly awaiting the next issue.

Historically it make an interesting parallel too because the original Oliver Twist was itself published like a comic, in monthly magazine installments over the course of three years. 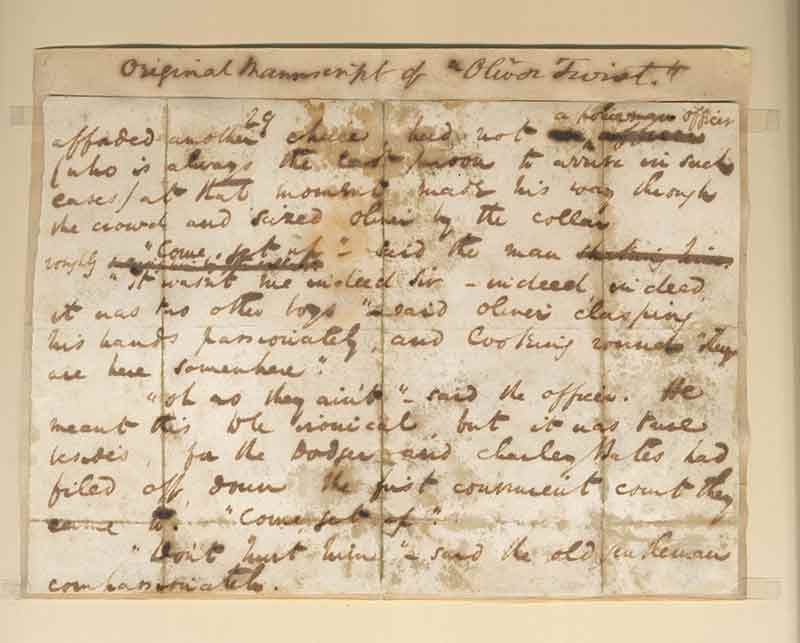 FOG!: How close of an adaptation is Oliver to Dickens’ original story, and what touchstones, both written and visual, were essential in the execution of the comic?

Gary Whitta: Thematically there are big similarities and you’ll recognize our versions of most of the famous characters from the Dickens novel but beyond that I didn’t want to feel shackled too much to the original narrative, it was important to me that Darick and I feel free to tell our own story. There’s really only one moment that feels absolutely essential to any adaptation — the “please sir, I want some more” moment — and we do have that, but beyond that it’s a very liberal adaptation.

Darick Robertson: Visually we have some recognizable moments, but overall, it’s not too married to the original novel, but more of a reinterpretation of the novel. As we get deeper into the story we’ll meet Fagin, and Dodger, etc… but they won’t be what you’d expect. Gary’s created a very clever original world and I’ve brought my best sense of deign to it and we’re still discussing where it will go as now we’ve had years to gestate the story and concept and the world around us has changed while we created this. The thing that stays consistent is, like Dickens time, it is a world of wealthy elites, and struggling working class people, orphans and princes, the powerful and the downtrodden.

FOG!: As the series progresses, are there other Dickensian characters planned to appear, or are you strictly sticking with those from Oliver Twist?

Gary Whitta: Darick and I have kind of half-joked about doing a Dickens Comics Universe, or DCU, where characters from other Dickens works would cross over in this universe, but for right now Oliver is just Oliver. If it’s a huge success and people do in fact say, “please sir, I want some more”, then who knows? 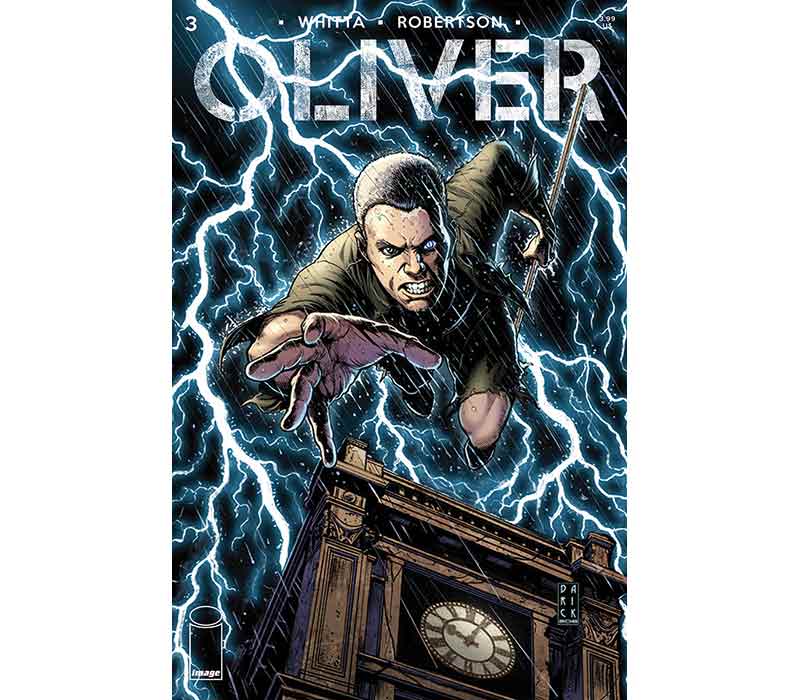 FOG!: This is potentially the third long running series you’ve worked on (after Transmetropolitan and The Boys), what do you find so appealing and presumably, energizing, about the project?

Darick Robertson: This series is set for 12 issues, so not nearly the commitment that The Boys and Transmetropolitan were. I have every intention of penciling and inking this so it’s a strong stand alone graphic novel when we’re finished, with the potential for more if there’s a demand. What energizes me is Gary’s friendship and enthusiasm. It took us a long time to get here and his loyalty and patience make the work feel purposeful.

FOG!: What are you currently geeking out over?

Darick Robertson: I’m still a big Star Wars fan and still love super-heroes. So this past year I enjoyed Solo, am excited that J.J. Abrams is directing Episode IX and looking forward to that. I loved Into the Spider-Verse and hope that Sony Animation makes a Fantastic Four movie that good. I think that would be incredible and solve that adaptation problem. Just read Naomi by Bendis and Jamal Campbell, and it is a gorgeous first issue. TV, I’m finally discovering Lucifer and my favorite shows are The Good Place and Netflix’s A Series of Unfortunate Events. (I’m also pretty excited about this new Amazon Prime series The Boys that comes out this summer…) 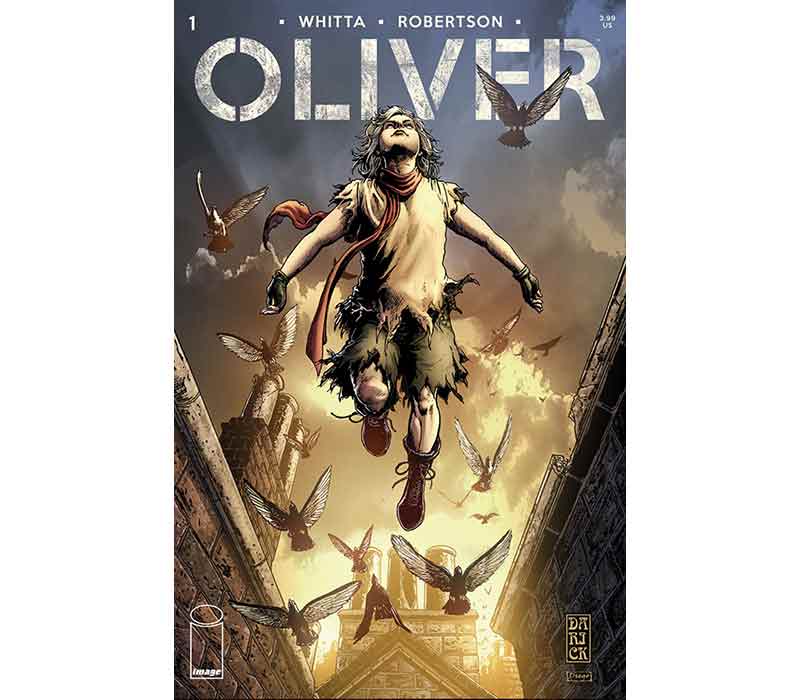 Oliver #1 is now available in comic book stores and via digital.