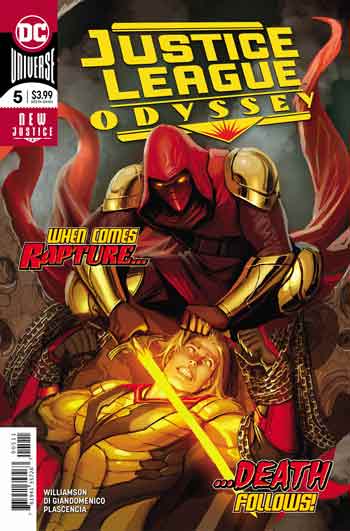 “We must have really pissed someone off… those robots keep coming at us!”

On the other hand, our oppressed heroes are all friends of the Cyborg, the professed True God of those chasing them down.

So, what were they even doing in a jail cell?

Much less now fighting for their lives?

Because it’s a great excuse for fighting off a swarm of killer robots, I suppose.

After all, if our band of Earth heroes really are the somehow-retuned old gods of the Ghost Sector, each with their own legions of followers, there seems an extremely straightforward way to resolve all of the potential strife between all the different sects and the worlds they hail from.

And maybe our team will finally get around to doing that. Eventually.

First, despite the natural presumption that our ‘old gods’ should be able to exert more than a small amount of influence over their followers, apparently that is not going to be sufficient to stop the worlds of the Ghost Sector from going to war over which of their deities gets to be the one true old god.

Heck, instead we find, already, that some of these followers, (some of the most devout of them in fact), seem all-too willing to turn on their gods – quite forcibly, I might add – when it seems they aren’t going to get with that program. Which is… strange.

But, fanaticism. I guess.

So, like I say, lots of opportunity for conflict. And at the center of it all, our heroes, who, so far, have been more than a little subject to the chaotic religious and warlike agendas swirling throughout the Ghost Sector, agendas being played out in the name of their deified aspects, despite the fact that they… are those aspects.

Secondly, we learn that Darkseid has (surprise, surprise) his own agenda in the midst of all this, and it’s not (*gasp*) what he’s told our heroes.

It’s to the credit of our editors that this plan is laid bare, only now, when the events out at the Source Wall are playing out in this month’s Justice League Annual, and the true scale of the threat to the DC Multiverse is made abundantly clear.

It is curious to note however, that Darkseid has not only anticipated all that happens there, but has long ago set a plan in motion throughout the worlds of the Ghost Sector to prepare for it. A plan which, if realized, will spell certain doom for the planets of the Ghost World. And one that will just as certainly set all of our old god heroes to war against him.

For now, though, there’s plenty of confusion, and alien landscapes, and warring fanatical sects (and one big upcoming family dust-up) to keep us all busy, while our team plays catch-up… and Darkseid travels the breadth of the Ghost Sector collecting all the components of his plan.

Including one extremely interesting piece from Tamaran, an artifact that seems sure to set the mythology of the New Gods and most particularly their dark counterparts of Apokolips at an entirely new angle.

One no longer so centered on Mother.

Next Issue: Return to Tamaran