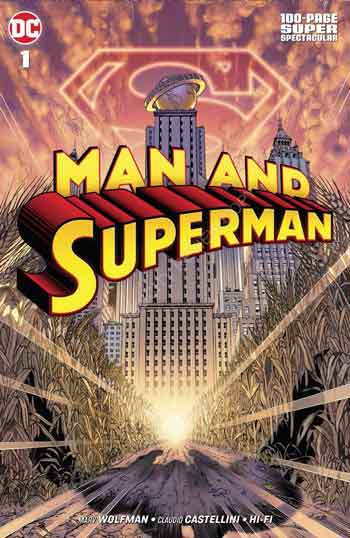 Legendary comics writer Marv Wolfman thinks he has written his best Superman story yet, and I wholeheartedly agree. Today’s 100-Page Super Spectacular is yet another retelling of the Superman origin story, but with one key twist, this is the story of Clark’s journey to Metropolis from a small farm town.

How does an inexperienced writer land a job at The Daily Planet with only Smallville High bylines to his name? How does he start to use his powers in a way that helps the citizens of his adoptive Earth? This sounds at first like something we’ve seen before, but here the Crisis on Infinite Earths writer visits an abstraction of the idea of Superman’s origin in Man and Superman that is required reading for longtime fans of his work, Superman fans, and extends to the casual comics reader.

If you are curious at all, stop what you are doing and grab this book digitally and come back to the review.

Yes, it is that good.

From All-Star Superman, The New 52 relaunch with t-shirt and jeans Superman, Secret Origin, Superman: Earth One and of course the classic John Byrne Man of Steel run, fans have been treated to a redux of these first days Clark moves on up to a decrepit apartment in the pigsties. What these stories have allowed for is legendary creators to explore this unknown but important era of Clark’s humble beginnings by filling in the gaps of our Man of Tomorrow’s development.

Truth be told, we have hundreds of volumes of Superboy stories, flashbacks to Kent Farm and homages to Donner’s film origin in the pages of Superman and Action, but these early days in Metropolis are almost untouched except for several different vignettes over the years.

Wolfman’s pitch went unproduced for years, has been in the can since 2006, and the story from script to page is a long one, told in his introduction to the book. Unfortunately for this reader, I think that DC marketing hasn’t rightfully pushed this book into everyone’s hands with much fanfare. What was once to be a four issue series is now collected into one volume as Man and Superman 100-Page Super Spectacular but could easily have been beefed up to a more prestige format. No complaints, mind you, of the length—it’s perfect—but I’m sure if any creator can come up with 20 more pages of exploration into Superman’s origin, Marv Wolfman is certainly that someone and there wouldn’t be any filler.

What makes this book so unique are a few things. Wolfman admits to crafting the script in a more modern way, to keep up with the trends of the industry not because he felt lagging behind, but as an exercise to move with an ever changing industry.

He succeeded in this, whole not a decompressed story, the tale reads like a 2019 comic. A page in the first chapter whereby Clark is walking down a city street and can hear everyone’s conversation reminded me fondly of a page in Joshua Dysart’s Harbinger from 2013. Very fresh indeed. Artist Claudio Castellini draws a heck of a good looking Superman but also draws the emotional small moments that complete Wolfman’s vision.

We get great introductions to Perry White and Lois as expected but also a cameo from Bibbo right at the top as Clark tries to find his way. He first lands himself a job as a janitor before being assertive enough to make his writing special enough for The Daily Planet editors, and he does so by, wait for it, scooping Lois Lane on a Superman story.

We see Clark not only struggling with money and the day to day, but also how and when he decides to go out and use his powers to save people. By not initially being careful about his identity, he uses a primitive pantyhose mask and his street clothes to hide his identity as The Flying Man. He’s not that careful and needs to cover his tracks as well as train himself not to leave fingerprints when in the field. Daily mirror affirmations temper his super strength as he practices a humble slouch as mild mannered cub janitor Clark Kent.

Only after some key moments is the suit revealed and he dons it in Metropolis for the first time. Wolfman’s flashback to Ma Kent first handing him the suit and Castellini’s rendering of Superboy’s costume reveal should go down in history as one of the best and story and art have burned this page into my memory, not soon forgotten!

The kindly couple are a bit older than they are usually depicted, but I think it serves the story to create some distance between the alien and his parents, especially considering his big move to Metropolis and heading out in his own.

Let this review serve as an urgent plea to pick up this “Super Spectacular” and join with us in the discussion on social media, I foresee fellow creators touting this as simply one of the best Superman stories released in the past few years.

As Wolfman says in his introduction, this is more of a Clark Kent story, and I would agree that this is relatable on many levels, Clark as everyman and Superman as a mysterious hero donning the cape to save the citizens of Metropolis. It’s a pity this isn’t a hardcover, I’d love it on my shelf next to my other classic Superman tales.