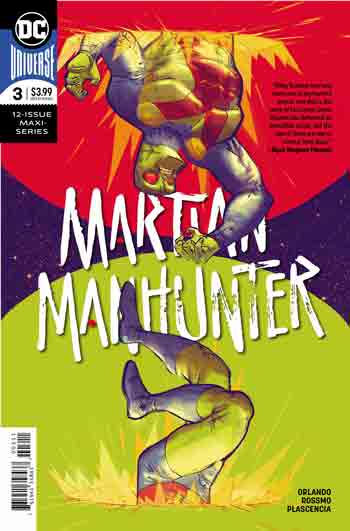 “I felt an emotion I thought I’d never sense again. Different but knowable…The dignified worry of a Manhunter in peril.”

Issue #3 of Martian Manhunter is a fine continuation of our tale. True, despite a sharp departure from any further fascinating, happy, memories of life on Mars.

Perhaps because, all the remaining memories are far less than happy.

Instead, for now, we begin with a flashback to another momentous event in J’onn J’onzz’s life – the instant at which the, truly, strange experiments of Dr. Saul Erdel pulls our time-torn Manhunter from Mars across millenia and space to the shores of modern Earth, to be stranded there, left to adapt to a new and alien life. Stranger in a strange land.

The story is part of J’onn’s desperate attempt to regain the confidence of John Jones’ long-time partner Diane Meade, who is justifiably freaked out at J’onn’s fractal cellular structure… and angry. After all, she has no reason whatsoever to trust this macabre alien creature who has supplanted her former partner so effectively that she never knew it.

But J’onn is eager to assure her that he does not wish to take any further drastic psychic measures to protect the secret of his presence on earth. Which is perhaps why she is willing to hear him out at all.

Not that the gun did much good.

And even as the story of his decision to assume the life of Detective John Jones rings entirely true to those of us who already know and trust the nobility in J’onn’s soul – assisted along with a little Martian cultural lesson for extra context – perhaps J’onn himself has begun to realize that he no longer truly wants to live unseen, hidden, and alone.

And suddenly the bare bones sketch of Martian Manhunter’s origin story takes on added depth and shape, one bracketed on either end by the great value J’onn places on the relationships in his life. A defining characteristic of a hero whose story embodies a downright archetypal struggle against the dangers of alienation.

Once again, Steve Orlando’s character portrayals are both believable and deft, with an ease of scripting that results in a thoroughly enjoyable read. And once again Riley Rossmo’s art holds up beautifully, lending a feel of old pulp and horror, to a modern retelling.

It’s worth noting that, as with so much going on now in DC’s new continuity, there are very specific differences between J’onn’s arrival and life on Earth than what has previously been related in DC canon.

As one example, there’s a curious throw-away line in the script, in which Dr. Erdel, before his death, refers to the ‘robot brain’ that helped him to pull J’onn to our time. It’s a curious reference and a tantalizing one.

Now that J’onn’s history has been revamped by Scott Snyder and James Tynion over in Justice League to include an earlier instance of J’onn’s visit to ‘Thu’ulc’andra’, as well as the suggestion of a grander cosmic design to his destiny, it would be quite welcome to see other elements and players revealed in whatever machinations landed J’onn in our era in the first place.

Up till now, it was always the result of an odd, uncertain mix of Martian and human technology. But maybe that’s no longer quite the case.

An answer for another day perhaps. In the meantime, the villain of our current storyline finally steps out of the shadows and into the spotlight this issue… and the figure he cuts is quite the stuff of nightmare.

A nightmare that perhaps has found its way onto the beat of our favorite Martian Manhunter, in no way, by accident…

Next Issue: Build a better mousetrap…