My kid brother—I’m sixty-eight, he’s sixty-four, so who am I kidding with this kid brother shit?—is a serious horseplayer. I have no idea what he sees in this enthusiasm, remaining indifferent as I always have to any entertainment attraction that involves wagering and chance.

I know, anecdotally, certainly, but I know for sure, that he’s not alone in this enthusiasm. As a civilian in this regard, the only time I’m aware of horse racing as a source of interest is that rare occasion when the media displays interest in a horse that might win the triple crown—not that I have any idea what the three components of that crown are.

The bottom line is that horse racing, which was once a national passion, has become a niche market for enthusiasts—and for those people who randomly and potentially drunkenly play the sports books at Las Vegas hotels, I suppose.

I’m as unaware of and unmoved by the passion for this sort of thing as I am of and for stamp and coin collecting, bowling leagues, ballroom dance fans…you get the picture. The world is awash in niches, with a place for fans and enthusiasts of all stripes.

And if somehow, someway, one or more of these niche enthusiasms found a surprisingly engaging and charismatic spokesperson to communicate to an otherwise indifferent population tangential to the niche his own enthusiasm for that niche, that newly intrigued audience’s understanding of this niche would be almost entirely filtered through that spokesperson’s sensibility, perspective, and subjectively personal agenda.

That’s how people are.

Now, not be too obvious, we in the comic book business, professionals and enthusiasts alike, are one of those niches—and a particularly tiny one at that. I can’t speak for my colleagues, but when I’m at a party or social gathering, and someone foolishly asks what I do for a living, I answer. The next question is “Would I know your work?”

The eye glaze that follows my response—“It’s a specific market…blah, blah, blah…” ends that…unless they have one more question…

This is, all too often, the totality of the civilian’s awareness of our little niche. It was Stan’s frequently clownish cheerleading that maintained public awareness of superhero comics in general, Marvel comics in particular, and of course Stan himself for the past fifty years.

It is my considered opinion that Jack Kirby made Stan Lee, but it was Stan’s relentless promotion that made the survival of modern mainstream comics possible. 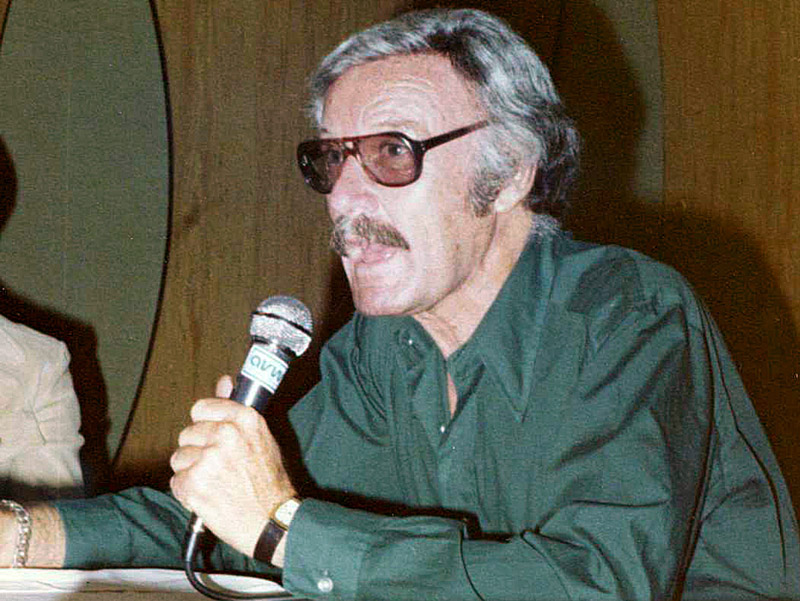 The upside of this is, to be sure, the continued publication of mainstream comic books…yes, the very existence, of comics—and a vast number of careers, including my own, thanks very much.

The downside is, to be equally sure, that the definition of mainstream comic books is, to put it bluntly, baseline superhero comics to one degree or another.

Of course, we in the niche know this isn’t all we produce, but that’s a niche for you…we’re looking out at an indifferent swathe of humanity that isn’t really interested in looking in…

…Except, of course, as an audience for those superhero blockbusters…and that’s where things get odd and complicated.

Now, I have a confession to make. I haven’t read a superhero comic book in years…but I’ve seen many, but not all, of the superhero movies that have been out there since Tim Burton directed that first Batman movie.

I regard myself as disengaged from the mainstream superhero comic book, while still available as a paying customer for the big budget stuff at the multiplex—along with all the other movies and other genres that show up at my local theater. For the record, we see almost everything.

I’ve enjoyed some of these superhero movies, endured more than my share, and disliked quite a few…but here’s the important takeaway, from a metric perspective.

The most successful purveyor of superhero movie product, Marvel Productions, under the aegis of Kevin Feige, has monetized to the tune of billions—billions, for fuck’s sake!—ancillary entertainment based on intellectual properties that 99.99% of those people spending those billions worldwide couldn’t begin to care less about, or to be blunt, even be aware of—and that .01% I’m giving you is generous.

Actual comics, as opposed to the massively profitable ancillary market that feeds on it, are functionally invisible to the naked eye. Those civilians at those parties I mentioned above are always confused when I tell them, either explicitly or implicitly, that these superhero productions have little or no impact on me and the majority of my colleagues, financially or otherwise.

So, to go back to that analogy, if the pitchman for horse racing, say, sold himself as a race track character, endowed with a certain Runyonesque goofiness…and his fellow horse racing enthusiasts embraced the style of his delivery…

…It’s highly likely that my indifference to digging deeper for a greater truth about horse racing would lead me to take what I saw in that spokesperson’s presentation as the truth, and believe that what we see is what there is, and that would be that.

And I believe that that’s what we’re seeing in Bill Maher and his rattling of the cage. He’s not talking about serious comics enthusiasts, neither of the mainstream nor the esoteric variety—or even, truly, comics itself.

He’s a civilian, looking in against his better judgment, and reacting to the superficial surface details of our curious niche.

Rather, he sees, I suspect, and for example, winces at the silly ridiculousness of cosplay.

He justifiably sneers at the combination of self-seriousness and circus silliness that frequently combines in those who find themselves representing this niche of ours in public venues.

He sees and judges the occasional desperate need to justify one’s love for what is all too often no more than passingly disposable fantasy—as if loving it makes it good, and alternatively, as if anyone has to apologize for and justify what they like in the first place.

Quite reasonably, his all too human indifference to actual investigation has left him ignorant of what comics actually are except in the most general way—much as my complete lack of interest in racing leads me to assume that anyone who plays the horses is a degenerate gambler.

And as noted in a short post earlier, Maher shares this contempt for mainstream comics with many members of the alternative comics movement—so don’t be surprised if two and two are put together, sooner rather than later, if not by him then by, say, one of his producers, and he brings on a spokesperson—Spiegelman, or Bechdel or Clowes, for example—to represent that claque, and support his point of view.

Thanks for reading, and as ever, I remain,

Howard Victor Chaykin—a Prince who, to this day, has to be occasionally reminded that what you think of me is none of my business.